With the debt ceiling deal all but assured of passage, Suzy Khimm moves on to the next big question: who’s going to be on the Supercommittee that’s tasked with cutting an additional $1.5 trillion from the deficit by November?

Republicans, for their part, are unlikely to appoint anyone who’s publicly supported including revenue as part of a debt deal, namely in the form of tax increases….“No one from the Senate Gang of Six, who proposed tax increases, need apply,” the Wall Street Journal opined. “The GOP choices should start with Arizona Senator Jon Kyl and House Budget Chairman Paul Ryan, adding four others who will follow their lead.”

On the Democratic side, fiscal hawks and centrists will probably back Senate Finance Committee Chairman Max Baucus, who reportedly pushed for cutbacks to Medicaid, food stamps and other entitlements….Liberals will want to see the likes of Sen. Tom Harkin and Sen. Sherrod Brown on the committee. “Unfortunately, I don’t think the leadership will allow this,” says Dean Baker, an economist at the Center for Economic Policy Research. “I worry that the Dems will be the usual suspects, starting with the Gang of Six crew.”

Unfortunately, this is my take too. Republicans will appoint nothing but tax hardliners (which shouldn’t be too hard, since that’s at least 80% of their caucus) while Democrats will appoint at least one or two centrist types. That’s all it will take to get a majority in favor of yet another cuts-only plan. 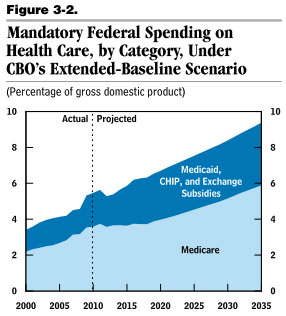 Whether this can pass in the Senate is unclear, but it might not matter. The entire debt ceiling agreement may have been negotiated under the presumption that no follow-on deal would be reached and the automatic trigger cuts were highly likely to go into effect. The Supercommittee might just be window dressing.

But maybe not. So given the reality that the Supercommittee exists, what would be my dream deal? Pretty simple: it would be an agreement to focus 100% of the plan on healthcare, split between benefit cuts and tax increases. Politically, this is a pipe dream, of course. And substantively, it runs into the fact that PPACA already made a lot of cuts in Medicare and we don’t yet know how they’re going to work out, which makes further cuts sort of dicey. That may not make additional reforms impossible, but it does make it especially important to choose the details thoughtfully. A slow phase-in of higher payroll taxes might be OK, for example, along with a little bit of means testing. Ditto for some reductions in provider payments, cuts in Medicare Advantage, and negotiating authority for prescription drugs. (Then again, these things might not be OK. I’d defer to smarter people than me over the details.)