After Barack Obama won the 2008 election, conservatives started up a drumbeat of conspiracy theorizing about a secret liberal plan to reinstate the Fairness Doctrine. The idea, apparently, was that this would put Rush Limbaugh and other conservative talkers 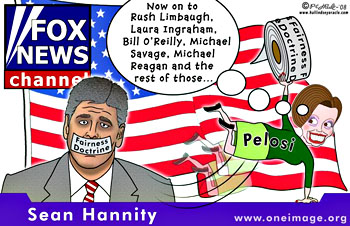 out of business and thus ensure both the perpetual domination of the Democratic Party in Congress as well as Obama’s plan to become president-for-life. Don’t believe me? The cartoon on the right is typical of the time. Click here for further pictorial proof.

This particular paranoid fantasy didn’t get a lot of attention because there were so many other better ones flying around, but I had a loyal reader who kept emailing me about this, so I wrote a few posts about it. Today, I’m happy to report, Obama’s FCC, responding to an Obama executive order, has finally nailed the coffin shut on the Fairness Doctrine:

The FCC gave the coup de grace to the fairness doctrine Monday as the commission axed more than 80 media industry rules.

Earlier this summer FCC Chairman Julius Genachowski agreed to erase the post WWII-era rule, but the action Monday puts the last nail into the coffin for the regulation that sought to ensure discussion over the airwaves of controversial issues did not exclude any particular point of view. A broadcaster that violated the rule risked losing its license.

….Monday’s move is part of the commission’s response to a White House executive order directing a “government-wide review of regulations already on the books” designed to eliminate unnecessary regulations.

Will this persuade anyone? Probably not. They’ll just insist that Obama really did plan to bring back the Doctrine, and it was only their relentless opposition that forced him to back down. What’s more, this is all just a feint. Obama may have lost a battle, but behind the scenes the war still goes on.

For the rest of us, though, this is the final chapter in the story of the Fairness Doctrine. Adios.