A couple of days ago I accidentally stumbled onto an odd bit of conservative outrage over the Obama administration’s alleged attempt to force farmers to get commercial drivers licenses if they wanted to continue operating their tractors and combines. It wasn’t true, but that didn’t really matter. The outrage had long since become self-sustaining.

Anyway, as I was googling my way through the woods trying to figure out what this was all about, I kept coming across references to Agenda 21, which was apparently some kind of nefarious UN scheme for world domination or something. But I wanted to stay focused on the whole farm thing, so I didn’t look into it beyond a quick peek at Wikipedia, which told me it was a “comprehensive blueprint” for 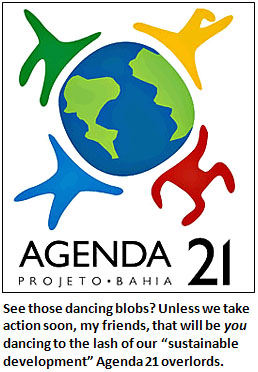 sustainable development adopted in 1992. That’s a long time ago, and not much has happened since then, so it didn’t really seem like much of a menace.

But I was wrong! By coincidence, Tim Murphy has a piece up today about…..Agenda 21. And Michele Bachmann. And light bulbs. Here’s a taste:

To some conservatives, Agenda 21 became something far more nefarious—a gateway to a global government built on a radical doctrine of secular environmentalism.

As these conservatives saw it, the agreement paved the way for the entire planet to be controlled by a central bureaucracy: Humans would be cleared out of vast swaths of settled areas—like the Upper Peninsula of Michigan, for example—and instructed to live in “hobbit homes” in designated “human habitation zones” (two terms embraced by tea party activists). Public transportation would be the only kind of transportation, and governments would force contraception on their citizens to control the population level. A human life would be considered no more significant than, say, that of a manatee. “Sustainability,” the idea at the heart of the agreement, became a gateway to dystopia.

I guess this is the new Trilateral Commission. Or the new NAFTA superhighway. Or something. In any case, there’s more, so much more at the link. I can’t believe that Glenn Beck never picked up on this. Or did he?