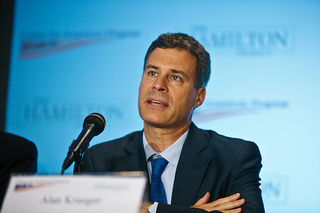 President Obama plans to nominate Alan Krueger to be chairman of the Council of Economic Advisors today, taking over from Christina Romer, who held the position for the first two years of his presidency, and Austan Goolsbee, who held it until last month. Krueger is most famous for his research suggesting that it’s possible to raise the minimum wage modestly without hurting employment levels, research that makes conservatives literally apoplectic if you mention it. Think I’m exaggerating? Krueger did the research with UC Berkeley’s David Card, and Card shortly decided to abandon the subject because of the furious response it provoked. Here’s his explanation for never wanting to do research on the minimum wage again:

It cost me a lot of friends. People that I had known for many years, for instance, some of the ones I met at my first job at the University of Chicago, became very angry or disappointed. They thought that in publishing our work we were being traitors to the cause of economics as a whole.

Now, who knows? Maybe Card is just unusually thin-skinned. But I don’t think so. This is the kind of thing that happens when you suggest that there’s more to life than simple Econ 101 models. The right hasn’t had time to respond to Krueger’s appointment yet, and maybe they’ll decide to give this a pass since (a) CEA chair isn’t exactly a high profile appointment among their tea party base, and (b) they already had their shots at him back when he worked at Treasury. But I imagine we’ll start hearing about it soon. Probably ferocious denunciations of Krueger as an ivory tower professor who denies the common sense operation of supply and demand, has no ground level experience in the business world (where he would have learned first-hand the crippling effects of raising the minimum wage), and is intent on, um — debasing the dollar. Yeah. Debasing the dollar.

Or something. Anyway, it should start soon. Should be fun in a B-list kind of way.