Here’s yet another tea party wingnut blathering on about how regulations are strangling American business:

Due to regulatory morass, the U.S. is not a good place for small hydro companies to do business. In order to build even the smallest facilities, a developer must go through the Federal Energy Regulatory Commission, U.S. Fish and Wildlife Service, Army Corps of Engineers, State Environmental Departments, State Historic Preservation Departments, and many more. Each of these agencies is just doing their job — but the cumulative impact weighs down small hydro and makes projects prohibitively expensive. 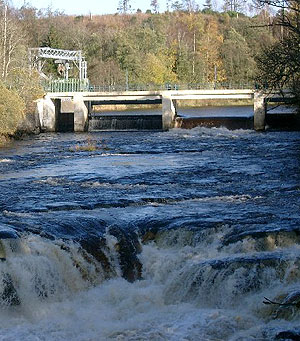 “The regulatory environment is not friendly at all. It’s incredibly difficult and expensive to build these facilities,” explains Lori Barg, CEO of Community Hydro, a developer based in Vermont. “It’s absurd, really.” Barg says that federal and state permitting can add up to $2,000 per kilowatt for projects under 1 MW. To put that in perspective: solar PV projects around 1 MW are being built today for about $3,000 a kW, including permitting, labor and equipment.

Oh wait. Sorry. That’s not a tea partier who wrote that, it’s Stephen Lacey over at ClimateProgress. He says that we have the potential to generate 30,000 megawatts of clean, renewable power via small hydro installations that are either run-of-river (i.e., require no damming) or could be built using existing dams. But they can only be built if the existing regulatory structure is substantially streamlined.

Republicans have made such an insane spectacle of themselves pretending that Barack Obama is some kind of regulatory madman that it’s easy to just dismiss them wholesale. Regulatory uncertainty is very plainly not what’s holding the economy back right now, no matter how many times conservatives repeat this canned talking point in front of the Fox News cameras. What’s holding us back is economic uncertainty: businesses don’t think there will be enough customers next year to justify expanding their operations this year, so they’re not expanding. Address that problem and businesses will start adding capacity, jobs will open up, and the economy will grow again.

Still, regulations do matter, and regulatory underbrush needs to be cleared away periodically. Nor is there any reason for liberals to fight this: after all, we favor regulations that serve a clear purpose, not regulations for their own sake. The value of clean energy is pretty high, and it might very well outweigh whatever benefits we’re getting from the current regulatory thicket. A pair of Republicans have introduced bills that take modest steps to streamline regulations for small hydro projects, and they’re probably worth a hard look.