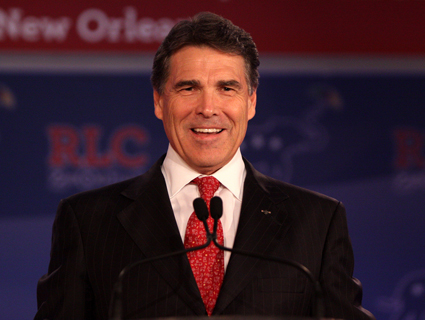 Editor’s Note: On Thursday, January 19, CNN reported that Texas Gov. Rick Perry would drop out of the presidential race and endorse former Speaker of the House Newt Gingrich. Back in mid-August, at the height of the GOP’s Perry-mania, Kevin Drum saw this all coming.

A few days ago I rashly said, “For the record, I don’t think Rick Perry can win the Republican nomination, and I know that he can’t beat Obama in a general election.” Unsurprisingly, a lot of people wanted to know just what made me so sure of that. So with Perry now officially in the race, I guess it’s time to explain myself.

Before I get to that, though, I have a mealymouthed caveat or three. First, if the economy is bad enough, anyone can win. And right now, the odds of the economy being bad enough are a little too close for comfort. Second, in recent years you could lose a lot of money continually underestimating the lemming-like power of the Republican Party to dive off ever-higher cliffs. Third, it’s absolutely true that you can make a pretty good case that none of the current GOP candidates can possibly win the nomination. And yet, someone will.

And there’s more. Perry is unquestionably a very good, very shrewd politician. He has access to lots of money. And he can deliver a pretty good speech. My beloved wife just finished listening to his announcement speech and told me, “He’s my favorite Republican right now.” When I grimaced, she just gave me a scary look. Scary because it’s the look that means she sees something that’s invisible to a committed partisan like me.

But enough of that. I’ve covered my ass enough. Here are the top 10 reasons why, despite all this, I think Perry is a weaker candidate than he’s being made out to be:

All that said, I might be wrong. But I’d still advise everyone to take Perry with a few more grains of salt than they have been. It’s easy for us urban liberals to just cynically assume that the tea partyized GOP will nominate whoever’s the dumbest, toughest, meanest, godliest sonofabitch in the field, but I’m not so sure. Perry may come out of the gate strong, but he might not wear well once the national spotlight is on him.

UPDATE: Why Rick Perry Can Win.