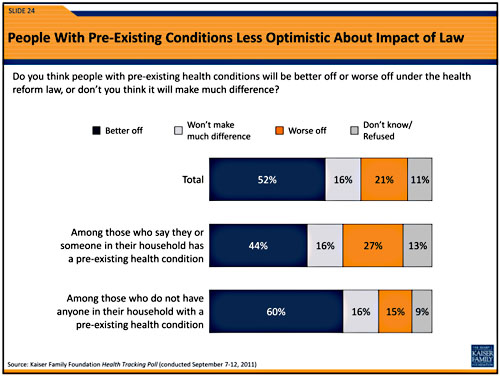 Sarah Kliff notes that this is similar to the results last month, when the uninsured were similarly pessimistic about the new law:

The explanation for the two poll results is probably pretty similar: The major parts of the health-reform law — the end to preexisting conditions and health insurance subsidies — don’t start until 2014. Health reform did have a few popular insurance reforms come online early, like the extension of dependent coverage up to age 26 and the end to preexisting conditions for kids. Those, collectively known as the Patients Bill of Rights, actually hit their one-year anniversary today. But even though those reforms are very popular, they haven’t had a wide reach. The health-reform law has yet to impact the vast majority of Americans.

I guess that’s right. And yet, this poll showed that 61% of the country knows that ACA will prevent discrimination against those with pre-existing conditions. So it’s not just lack of knowledge at work here. It’s possible, I suppose, that people with pre-existing conditions tend, on average, to be low-information types, so they’re less aware of ACA’s provisions than average. We’d have to see some crosstabs to be sure. But one thing is certain: it continues to be the case that people have a pretty poor understanding of just what’s in the law. Maybe that’s inevitable, but it’s hard not to think that it’s also due to a pretty lousy sales job from the left to balance out the constant and uncompromising attacks from the right.