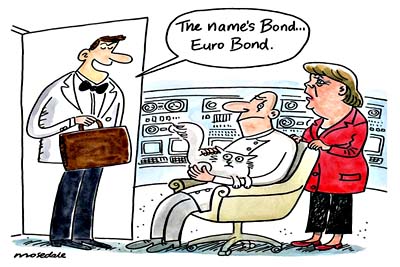 Over the weekend I linked to John Lanchester’s piece in the London Review of Books about the general shape of the Eurozone crisis. Here’s a key passage:

On 16 August, Nicolas Sarkozy and Angela Merkel had an emergency meeting to decide what to do about the Eurozone crisis. After it….they precisely and explicitly ruled out the only two things which would have helped: the creation of ‘eurobonds’, i.e. debts backed by the full economic weight of all the countries inside the eurozone; and the extension of the €440 billion European Financial Stability Facility. It’s easy to see why they did this, and their reasons are entirely to do with the domestic unpopularity of giving more aid to the indebted and severely struggling ‘Club Med’ countries of Southern Europe. Unfortunately, Merkel and Sarkozy’s inaction is a recipe for certain disaster. Everybody and his cat knows that the eurobond is the only way out of the crisis for the eurozone in the medium term.

I think this deserves a bit of clarification. If everybody knows that eurobonds are the answer, why is everyone opposed to them? As dangerous as it is to offer an analogy on the internet, let’s try one.

Say you have a Visa card. If you buy something expensive and go into debt, you’re responsible for paying it off. If you can’t pay it off, you have to declare bankruptcy, and maybe your home goes into foreclosure. This is bad for the neighborhood, and it’s especially bad if it happens to a bunch of people at once. Lots of foreclosed houses is bad for property values.

So you have a bright idea. Instead of individuals each paying off their own Visa bills, they’ll get pooled. At the end of each month the entire neighborhood will pay off everyone’s Visa bill. No bankruptcies! No foreclosures! Hooray!

But the downside is obvious: nobody has any incentive to spend wisely. If I want to, I can go out and buy a Rolls Royce and put it on my Visa card. At the end of the month, the cost of my Rolls gets divvied up and everyone in the neighborhood pays a share. I get a new Rolls Royce and my net cost is only a thousand dollars or so. That’s obviously pretty cool for me.

But it’s just as obviously unacceptable to everyone else. If we want the entire neighborhood to pay off our collective debt, then the neighborhood needs to have some say in how much each of us is allowed to spend. A neighborhood council of some kind will have to determine just how much we’re each allowed to charge to our Visa cards. So if I want to pay cash for my Rolls Royce, fine. But if I want to put it on my Visa card, I’ll need permission first from the council. Because our debts are pooled, the neighborhood council now has plenary powers to insert itself deeply into my household spending. If they don’t like my spending habits, they can force me to stop.

This is, roughly, what a eurobond does. Instead of each country issuing bonds for its own debt, the entire continent issues bonds for everyone’s debt. And that’s pretty unpopular with everyone. Poor countries don’t like it much because it gives the rich countries the power to tell them how much they’re allowed to spend. And who wants a bunch of penny-pinching Germans telling you how much you can spend? But the rich countries don’t like it much either. They’re basically afraid that politics being what it is, they’re going to get outvoted and end up holding the bag for spendthrifts over and over. And who wants to be responsible forever for their Greek brother-in-law’s profligate ways?

So that’s the problem. A big one-time bailout right now is bad enough. But “fiscal union” means that everyone is collectively responsible for every country’s debt forever — and everyone has a say in every country’s spending forever. Maybe that’s where things will end up eventually, but no one likes it. It’s only going to happen if it’s absolutely the last resort.