So how about that crushing regulatory burden that our business-hating president has imposed on the American economy? Well, not so much, actually:

During Obama’s first two years in office, 555 new “significant” regulations, or ones that have a cost or benefit of at least $100 million in a year, have been enacted, according to the Office of Management and Budget. Over the eight years that 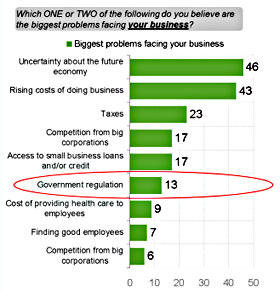 former president George W. Bush was in office about 2,380 regulations were enacted, an average of 595 every two years.

Granted, these are just raw numbers, and some regulations are more onerous than others. But it sure doesn’t sound like Team Obama has been a whirlwind of regulatory activity, does it?

Separately, here’s a chart from a new study released today by Small Business Majority, a group that does a lot of research on healthcare and clean energy. “The best way to find out what small business owners want is to ask them,” says their website, so that’s what they do. And in their latest survey, small business owners said their biggest problem was uncertainty about how the economy is doing. Regulation came in a distant sixth.

One more time, then, this time with feeling: the big problem faced by businesses today is economic uncertainty, not regulatory uncertainty. Business owners may not like new rules (who does?), but their real problem is a lack of customers. That’s something we could go a long way toward fixing if we really wanted to.