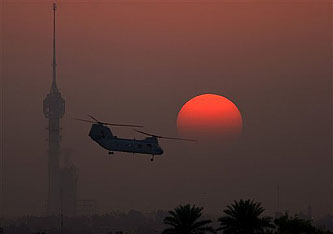 Defense Secretary Leon E. Panetta is supporting a plan that would keep 3,000 to 4,000 American troops in Iraq after a deadline for their withdrawal at year’s end, but only to continue training security forces there, a senior military official said on Tuesday. The recommendation would […] involve significantly fewer forces than proposals presented at the Pentagon in recent weeks by the senior American commander in Iraq, Gen. Lloyd J. Austin III, to keep as many as 14,000 to 18,000 troops there.

The proposal for a smaller force — if approved by the White House and the Iraqi government, which is not yet certain — reflected the shifting political realities in both countries.

….In Iraq, a lingering American military presence is hugely contentious, even though some political leaders, especially among the Kurds and Sunnis, would like some American troops to stay as a buffer against what they fear will be Shiite political dominance, coupled in turn with the rising influence of neighboring Iran….But despite the reluctance of several administration officials to publicly get out ahead of a formal recommendation and a presidential decision on such a delicate issue, as a practical matter Mr. Panetta has almost run out of time for the military to plan the logistics of a withdrawal by year’s end.

Every leak has a reason. So here’s my guess: this leak is designed to put pressure on Iraqi prime minister Nouri al-Maliki. The Pentagon needs time to plan its troop withdrawals, and for quite some time they’ve been saying that four or five months is the bare minimum they require. But the Iraqis have been hemming and hawing all year, refusing to say they want any troops to stay but also refusing to say they want them all to go.

So now it’s put-up-or-shut-up time. The message here is simple: we’re starting the machinery to withdraw nearly all our troops unless you tell us ASAP that you want us to stay. In another month or two it’s going to be too late to change direction, so make up your minds now.

Perhaps this will concentrate some minds in Baghdad. But if it doesn’t, we’ll finally be out of Iraq — except for the contractors, CIA staff, embassy guards, and 3,000 or so trainers, of course. But other than that, we’ll be out.