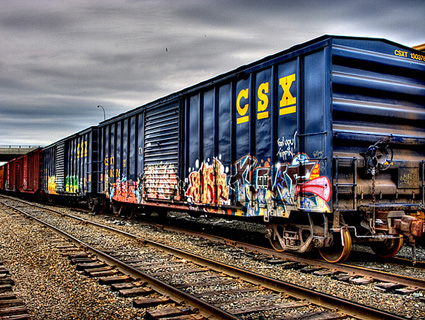 A few weeks ago I rode an American train for just about the first time in my life. It was the 9:07 Metro North from Grand Central Terminal to New Haven, Connecticut, and I’m sort of embarrassed to say that I was slightly shocked by the experience. It’s not that I had any problem getting to New Haven: The train left on time and arrived on time. But the two-hour ride itself was terrible: bouncy and loud and swaying and uncomfortable for practically the entire way. If you’re not a car-happy Southern Californian like me, maybe this doesn’t surprise you. But it did surprise me—at least a little—and there’s a reason for this: Although I’ve never taken a train anywhere in the United States, I’ve been on plenty of trains in Europe. Not bullet trains, just ordinary intercity trains. And so I always figured this was what all first-world trains were like: fast and quiet and suspended on a railbed that’s smooth as glass.

Go ahead and laugh. I deserve it. But although this is a minor annoyance in the great scheme of things, it’s symptomatic of our deteriorating public infrastructure in the United States. A gas pipeline in San Bruno, California, exploded last year, killing eight people, and on Wednesday the chair of the National Transportation Safety Board announced the results of its investigation: The explosion was a story of “flawed pipe, flawed inspection, and flawed emergency response.” It was, she said, “not a question of if the pipe would fail, but when.” And this wasn’t just a story about San Bruno or just about Pacific Gas and Electric: The rest of our national gas pipeline network is under similar strain.

Our electrical grid is just as famously antiquated. In 2003, the failure of a transmission line in Ohio, which should have inconvenienced a few thousand customers in the Cleveland area, instead produced a massive rolling blackout along the entire Eastern seaboard that affected 55 million people. Why? Because of aging and poorly integrated control equipment—equipment that, nationwide, hasn’t improved much since. This is a problem almost everywhere. Our trains, even in the busy Northeast corridor, are second rate, our airports are embarrassments, our dams are leaking, and our bridges are crumbling. Taken as a whole, the average age of our public capital stock has risen from 16 to 23 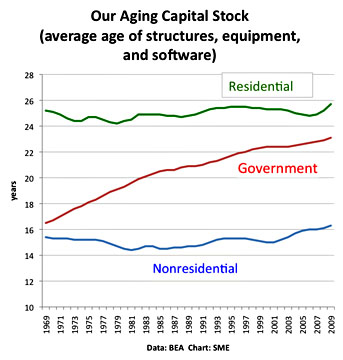 The American Society of Civil Engineers agrees. In their most recent report card, they gave our solid waste facilities a C+, our bridges a C, our rail a C-, our energy infrastructure a D+, our dams and schools a D, and our roads, levees, and inland waterways a D-. Nothing got an A or a B.

All of this is common knowledge. What’s also common knowledge is that manufactured outrage over the deficit aside, the federal government can currently borrow money for free. Actually, it’s even better than that: It can borrow money at negative interest rates. If we want to upgrade our national infrastructure, there’s no better time to do it than right now. As Dartmouth professor Matthew Slaughter puts it, “There is a crucial connection between potholes and unemployment.” Repairing our infrastructure will put people to work during a long and seemingly unending economic slump; it will provide us with the capital stock we need to compete on the world stage in the future; and it will cost us less now than it ever will again. It’s a no-brainer.

All of us have our fantasies about what we’d like President Obama to say in his big speech next week about jobs. Here’s mine: ask Congress to appropriate a trillion dollars to be spent on infrastructure upgrades over the next five years. That’s it. That’s the jobs plan. A trillion dollars to make us into a first-world country again. And as part of the enabling legislation, ask for emergency powers to temporarily streamline the regulatory red tape, interagency approval processes, environmental-impact statements, and labor rules that might otherwise keep the money from being put to work speedily.

Will a Republican Congress agree to do this? Almost certainly not—at first, anyway. But building and repairing infrastructure is no boondoggle. It needs to be done, it needs to be done now, and it would be an easy sell to a public cynical about the government’s ability to do anything concrete to help them. Make the case aggressively and you never know. Free money is free money, and even Republican voters like the idea of clean water, safe bridges, pipelines that don’t blow up, electrical grids that work, and dams and schools that aren’t crumbling.

So that’s it. A trillion dollars for infrastructure. That’s the plan. Let’s do it.