Felix Salmon directs us today to the Kauffman Foundation’s fourth-quarter survey of prominent economics bloggers. Asked to assess the U.S. economy in one word, here’s how they responded: 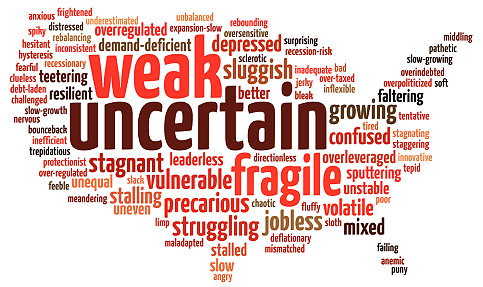 Take it for what it’s worth, but econbloggers seem to be a pretty gloomy lot. The Kauffman group also leans right a bit, which makes this chart interesting too: 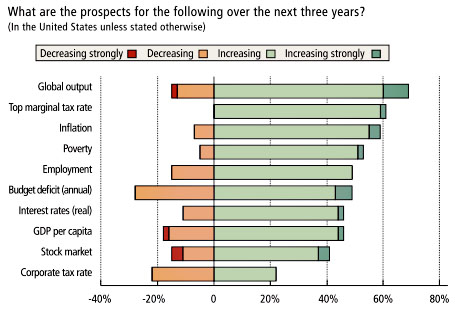 They’re very bullish on the world economy, but they also think inflation will be higher, poverty will be higher, interest rates will be higher, and the budget deficit will be higher. Even more interestingly, they unanimously think that tax rates on the rich will go up. That can’t be due to economic fundamentals, so presumably it means they have (a) a very high regard for the Democratic Party’s ability to hold firm on allowing the Bush tax cuts on the rich to expire next year, and (b) a very low regard for the likelihood that a Republican will become president in 2012 and put them right back in place. I wonder why?