Now, it’s true that some of the protesters are oddly dressed or have silly-sounding slogans, which is inevitable given the open character of the events. But so what? I, at least, am a lot more offended by the sight of exquisitely tailored plutocrats, who owe their continued wealth to government guarantees, 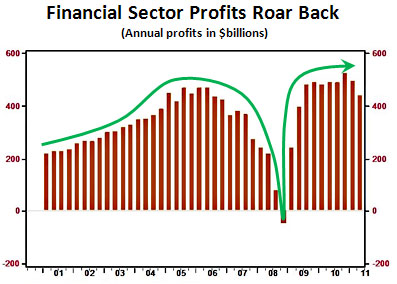 whining that President Obama has said mean things about them than I am by the sight of ragtag young people denouncing consumerism.

This is a really important point, and it’s especially important for sober, mainstream, analytical liberal folks. Like me. So consider this post a warning to myself.

If you go to any tea party event, you’ll hear some crackpot stuff and see some people dressed up in crackpot costumes (tricorner hats etc.). By “crackpot,” I mean stuff so outré that even movement conservatives know it’s crazy and want nothing to do with it. Of course, it gets reported in the media occasionally, and when it does, snarky liberals have a field day with it.

But does this scare off anyone on the right? It does not. They ignore it, or dismiss it, or try to explain it away, and then continue praising the overall movement. The fact that liberals have found some hook to deliver a blast of well-timed mockery just doesn’t faze them. They know whose side they’re on.

So Krugman is right: liberals need to take the same attitude. Are there some crackpots at the Occupy Wall Street protests who will be gleefully quoted by Fox News? Sure. Are some of the organizers anarchists or socialists or whatnot? Sure. Is it sometimes hard to discern a real set of grievances from the protesters? Sure.

But so what. Ignore it. Dismiss it. Explain it away. Do whatever strikes your fancy. But don’t let any of this scare you off. We can put up with a bit of mockery if we keep the chart above firmly in front of our faces. Just keep reminding yourself: a mere three years after the financial industry nearly destroyed the planet, Wall Street is bigger and more profitable than ever while a tenth of the rest of us remain mired in unemployment. Even after nearly destroying the planet, virtually nothing has changed. That’s the outrage, not a few folks with funny costumes or wacky slogans. Always keep in mind whose side you’re on.