What happens when a Republican candidate for president finds himself on the defensive over a hot button culture war issue beloved of the tea party base? Answer: in an effort to maintain his 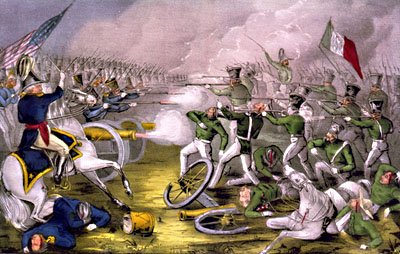 Texas Gov. Rick Perry said Saturday that he would consider sending U.S. troops into Mexico to combat drug-related violence and stop it from spilling into the southern United States. “It may require our military in Mexico,” Perry said in answer to a question about the growing threat of drug violence along the southern border. Perry offered no details, and a spokesman, Robert Black, said afterward that sending troops to Mexico would be merely one way of putting an end to the exploding cartel-related violence in the region.

Black said Perry’s intention is to work with the Mexican government, but he declined to specify whether Perry is amenable to sending troops into Mexico with or without the country’s consent.

Do I even need to spell out why this is such an unconditionally boneheaded idea? Probably not, but Steven Taylor has done the job here just in case. I can’t wait to get the official Mexican government reaction to this.

I don’t get it. Is Mitt Romney really such a blood-curdlingly terrifying opponent that he scares every other candidate in the field into repeatedly immolating themselves? This is crazy.