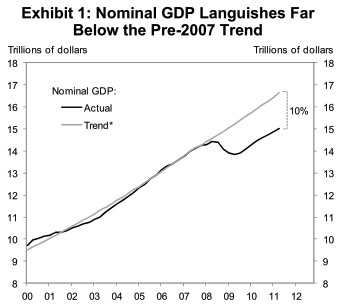 What kind of monetary policy should the Fed follow? Scott Sumner has long argued that the Fed should set a target for nominal GDP—that is, GDP before corrections for inflation—and follow it come hell or high water. This has recently gotten some high-profile endorsements, including one recently from a Goldman Sachs team. And Paul Krugman recently gave the NGDP forces a boost on his blog:

And one thing the market monetarists may have been right about is the usefulness of focusing on nominal GDP. As far as I can see, the underlying economics is about expected inflation; but stating the goal in terms of nominal GDP may nonetheless be a good idea, largely as a selling point, since it (a) is easier to make the case that we’ve fallen far below where we should be and (b) doesn’t sound so scary and anti-social.

I think this gets it roughly right. The thing is, it’s not clear to me how much real difference there is between targeting NGDP, targeting inflation, targeting real interest rates, dropping money from helicopters, or engaging in quantitative easing. This is what I’d like NGDP advocates to make clear. Instead of telling us what they’re targeting, or what their preferred policy is called, tell me three things:

This would cut through a lot of the confusion. The Fed is not infinitely powerful: For both legal and practical reasons, it has only a certain set of activities it can engage in. So tell me what specific activities you think it should engage in. This isn’t a panacea, of course. It would cut through a lot of the fog in one sense, but it would almost certainly create a whole bunch of new fog at the same time. Still, I think it would get us a bit closer to focusing on the underlying issues.

For more, see Robert Waldmann, who discusses in wonky detail just what NGDP targeting is and how it might work. See also Brad DeLong here, who has a useful discussion, though at the level of an IS-LM framework rather than the level of Fed mechanics. His conclusion:

To try to target nominal GDP using either only monetary policy or only fiscal policy seems hazardous. To coordinate—monetary and fiscal expansion, money printing-financed purchase of useful things—seems to be the winner.

I’m on board with this. Monetary and fiscal policy both have limitations, and using them in tandem is almost certainly more effective in a recession like the current one. What’s more, why not? The downsides of expansionary fiscal policy are pretty small, so we’d be smart to simply throw everything we have at the problem.