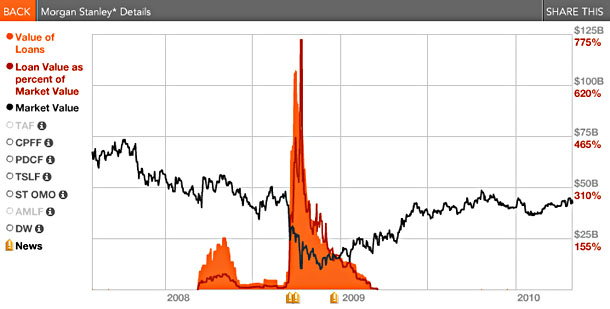 The chart above is from Bloomberg, and it’s an example of how much liquidity the Fed pumped into the banking system during the height of the financial crisis in 2008. Felix Salmon explains what it means:

Ladies and Gentlemen, this is what a lender of last resort looks like….On September 16, 2008, Morgan Stanley owed $21.5 billion to the Fed. The next day, that number doubled, to $40.5 billion. And eight working days later, on the 29th, the bank’s total borrowings from the Fed reached $107 billion. The Fed didn’t blink: it kept on lending, as much as it could, to any bank which needed the money, because, in a crisis, that’s its job.

Why is this relevant today? Because the European banking system has gone from bad to worse in just the last few days and Europe desperately needs a lender of last resort now. Unfortunately, it doesn’t have one because the European Central Bank is either unable or unwilling to take on the role. Here is Wolfgang Münchau:

In virtually all the debates about the eurozone I have been engaged in, someone usually makes the point that it is only when things get bad enough, the politicians finally act — eurobond, debt monetisation, quantitative easing, whatever. I am not so sure….With the spectacular flop of the German bond auction and the alarming rise in short-term rates in Spain and Italy, the government bond market across the eurozone has ceased to function.

The banking sector, too, is broken. Important parts of the eurozone economy are cut off from credit. The eurozone is now subject to a run by global investors, and a quiet bank run among its citizens….Technically, one can solve the problem even now, but the options are becoming more limited. The eurozone needs to take three decisions very shortly, with very little potential for the usual fudges. First, the European Central Bank must agree a backstop of some kind….

Like Münchau, I’ve long been a member of the “when things get bad enough” school, but my faith is being sorely tested. This is likely to be a very, very bad week in Europe.