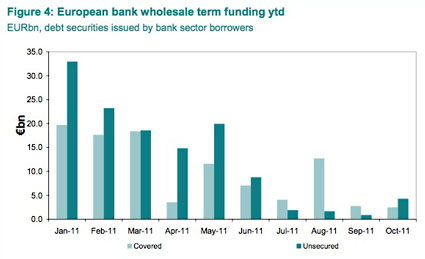 This chart comes via Felix Salmon from an Exane report on Europe’s banking system. Basically, what it shows is that wholesale funding between European banks has dried up. This is, needless to say, a big problem: “The way the banking sector works,” he explains, “banks have to be constantly lending to each other: in nearly every country in Europe, the amount of bank debt coming due every day is higher than the total amount of bank capital in the system.”

The whole thing is a bit mysterious, though, as bank runs so often are. In the United States in 2008, the same thing happened both to specific banks that were in trouble (Bear Stearns, Lehman Brothers) and to the banking system in general. But the reason was fairly obvious: American banks held huge portfolios of subprime toxic waste, but no one knew exactly who held what or how much it might be worth. This made the entire banking sector suspect, and wholesale funding dried up systemwide.

Europe’s case is different. Their problem right now is sovereign debt, and that’s much more quantifiable. The value of some sovereign debt
(Greece, Italy, etc.)
is indeed in doubt, but at least we have a pretty good idea of which banks hold how much debt. So even if you assume a substantial markdown of sovereign debt, you can still have a pretty good idea of which banks are in trouble and which ones are basically fine. So why has wholesale funding plummeted throughout the entire banking system?

This is something I haven’t quite sussed out yet. But in one sense it doesn’t matter: panic is panic, and if banks are in the middle of a run — which is essentially what a wholesale funding cutoff is — then somebody has to step in and act as lender of last resort. Unfortunately, Europe no longer has anybody to take up this role:

This is a serious structural issue with the way that the European monetary system was constructed: the ECB is tasked only with guarding inflation, and not with ensuring the health of the banking system. Individual national central banks are meant to do that. But they can’t print money — only the ECB can. So when there’s a liquidity crisis, no one’s able to step in and solve it.

….But it’s liquidity crises which are the most violent, and which can kill a financial system — indeed, an entire economy — more or less overnight. Someone in Europe needs to come up with a plan for how to address the current crisis — now. Because if it gets any worse, it could well be too late.