The only thing that surprises me about this is that it didn’t happen sooner: 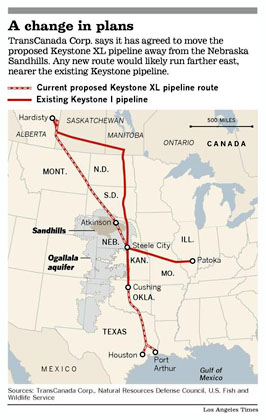 would shorten any delay in the project, which has posed political complications for the Obama administration.

….The announcement came during a special session of the Nebraska Legislature and won immediate support from many lawmakers….Under the agreement with TransCanada, the Nebraska Department of Environmental Quality will join federal officials in preparing a supplemental environmental impact statement to study an alternative route around the Sandhills.

When the State Department issued its delaying order last week, its official position was that it needed more time to study the effect of the pipeline on the Ogallala aquifer, especially the Sandhills section where a rupture could easily seep pollutants into the water supply. So why did the Keystone folks refuse to consider rerouting in the first place? Why not spend a little bit more and take away the Obama administration’s easy excuse for delay?

It is a mystery. I guess they thought they didn’t need to. In any case, TransCanada’s suggestion that maybe now the State Department will consider making a decision in a few months, instead of dragging things out for a year or more, is charming but clearly a nonstarter. It’s pretty obvious that “12 to 18 months” means “sometime after November 6, 2012.” If Obama wins reelection, I don’t doubt for a second that he’ll wait a decent interval and then approve the new routing. The victory of the environmental movement over Keystone XL was almost certainly just a temporary reprieve.