As longtime readers with good memories will remember, Peter Wallison of AEI has spent several years pushing the preposterous idea that Fannie Mae and Freddie Mac were responsible for the subprime bubble. (See here and here for background.) After Wallison’s latest jeremiad, Joe Nocera has finally decided he can’t take it anymore:

So this is how the Big Lie works.

You begin with a hypothesis that has a certain surface plausibility. You find an ally whose background suggests that he’s an “expert”; out of thin air, he devises “data.” You write articles in sympathetic publications, repeating the data endlessly; in time, some of these publications make your cause their own. Like-minded congressmen pick up your mantra and invite you to testify at hearings.

….Thus has Peter Wallison, a resident scholar at the American Enterprise Institute, and a former member of the Financial Crisis Inquiry Commission, almost single-handedly created the myth that Fannie Mae and Freddie Mac caused the financial crisis….Allies? Start with Congressional Republicans, who have vowed to eliminate Fannie and Freddie — because, after all, they caused the crisis! Throw in The Wall Street Journal’s editorial page, which, on Wednesday, published one of Wallison’s many articles repeating the Big Lie. It was followed on Thursday by an editorial in The Journal making essentially the same point. Repetition is all-important to spreading a Big Lie.

What’s most remarkable about this is how brazen it is. As Nocera notes, Wallison’s latest piece is about the charges the SEC brought last week against six former Fannie and Freddie executives. That’s a plausible hook for Wallison’s hobbyhorse, but even a casual reading of the case shows that the SEC isn’t claiming that government mandates for affordable housing drove Fannie and Freddie headlong into the subprime market. Just the opposite: Starting around 2002, Wall Street banks started their subprime binge and Fannie and Freddie began to lose market share. A few years later, when Fannie and Freddie joined the subprime orgy, they 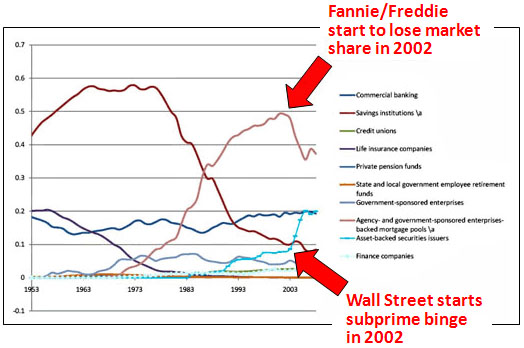 were doing it to compete with their private sector rivals, not because Congress or anyone else was forcing them to.

How brazen is this? Just look at the chart on the right. In 2002, Wall Street banks start the subprime bubble. That same year, Fannie and Freddie see their market share start to plummet. It’s not until 2005, at the tail end of the bubble, that Fannie and Freddie get back into the game.

This is butt simple stuff. All you have to do is look at one simple chart to see exactly what happened. And yet, conservatives don’t care. As Paul Krugman says, this “isn’t just a case where different people look at the same facts but reach different conclusions. Instead, we’re looking at a situation in which one side of the debate just isn’t interested in the truth, in which alleged scholarship is actually just propaganda.”

Fannie and Freddie were bad actors in a lot of ways, and that makes them an easy target for conservatives who are desperate to absolve the private sector of any blame for the financial crisis. But when it comes to assigning blame for the housing bubble, the evidence against them is laughably thin. Like it or not, this was Wall Street’s fault.