For reasons that escape me, the latest craze in conservative pundit circles is to claim that Republicans aren’t, in fact, unalterably opposed to tax hikes on the rich. Charles Krauthammer made this case last week, and Reihan Salam has since picked up the ball and taken a run up the gut with it a few times recently. For example, here he is objecting to Ron Brownstein’s latest column:

[Brownstein] suggests that the GOP is aiming for “a deficit plan that relies solely on spending reductions (particularly in entitlements) while preserving tax cuts for the affluent.” As Keith Hennessey has explained, congressional Republicans have made a strategic shift on taxes. Opposition to any net tax increase was a way to secure leverage in negotiations over the long-run fiscal trajectory. But leading Republicans have demonstrated an openness to net tax increases, and in particular to an increase in the average tax rates paid by the most affluent households, provided it is part of a package that secures structural, architectural Medicare reform.

This is just flatly untrue, and I’m a little surprised at how flagrantly it’s been bandied about lately. The Toomey proposal in the supercommittee did indeed include about $300 billion in new taxes, some of which would have fallen on high-income earners. But Toomey’s proposal explicitly tied 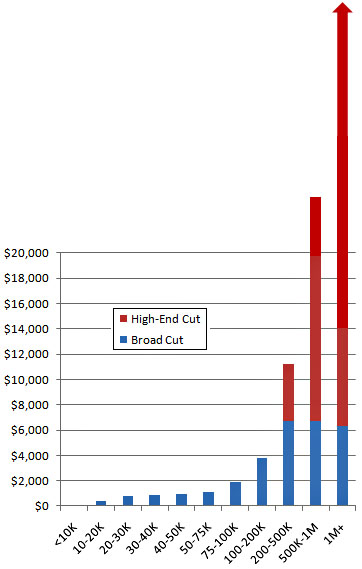 this to a demand for permanent extension of the Bush tax cuts for the rich (those are the red bars on the right, the ones that fall exclusively on those earning more than $200,000). Unlike the other Bush tax cuts, these cuts are very much a matter of contention between the parties, so Toomey’s proposal, in plain English, was this:

Conservatives try to handwave this away by claiming it’s “just a baseline game” or some such, but if it were just a game they wouldn’t care about it. In fact, as they know quite well, we’re talking about actual tax dollars paid by actual people that affect the actual budget deficit. Compared to the law as it stands now, Toomey’s deal explicitly demanded that net taxes on the rich go down by about $400 billion after 2013. That was the only deal ever on the table.

If you want to claim that it’s a breakthrough merely for Republicans to propose a reduction in the net size of the Bush tax cuts, that’s fine. But a net increase? They’ve never even come close to offering that.