Lisa Pollack at FT Alphaville mulls a question: “Why are we so good at creating complexity in finance?” The answer she comes up with is the “Flynn Effect“, basically the idea that there is an uptrend in human intelligence. Finance, in this view, gets more complex 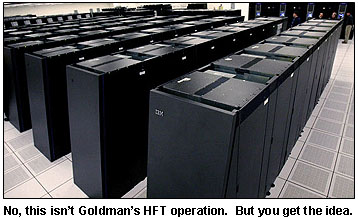 over time because financiers get smart enough to make it so.

That’s an interesting conjecture. But I don’t think it’s right at all.

Steve goes on to explain that finance has always been complex, and that this complexity is basically a way of collectively fooling ourselves into shoveling our money into risky investments that we probably wouldn’t make if we really knew what risks we were taking. It’s a pretty desolate view of things, and while there’s a kernel of truth to it, I suspect it’s driven more by despair over our immediate problems than by a more considered view of history. It’s sort of like adopting just the bad half of Minsky and leaving it at that.

In any case, although I agree with Steve that Wall Street considers opacity in finance a feature, not a bug, I think Lisa Pollack basically has it right. Except that our increased smarts have nothing to do with either the Flynn Effect or with gray matter that’s better at abstract reasoning than it used to be. Our facility for abstract reasoning has improved, but this is solely down to one thing: computers.

That’s it. Take away cheap computers and cheap global communications nets, and finance today would look an awful lot like finance in the 60s. That’s where our increased smarts come from.

This is, by the way, a fundamentally gloomier view than either Steve’s or Lisa’s. If complexity were truly just a con game, there’s at least a chance that we might wise up and figure out a smarter way of running the world. Alternatively, if humans really were getting smarter, there’s a chance that we might get a handle on all this complexity and harness it for good rather than evil.

Instead, we have humans of distinctly limited intelligence using digital computing power to create a financial system so complex that no one truly understands it. Like the blind man and the elephant, we get glimpses now and then of the whole, and certain individuals manage to understand small bits of the system in detail. But no one truly comprehends the entire thing. We just know that certain algorithms produce big profits for the right firms until they don’t, and the trading of shiny new financial instruments creates millionaires out of the right people until everything collapses for reasons we’re left to guess at. But that’s OK. Who needs comprehension as long as the right firms and the right people benefit?

I don’t think anybody can be said to genuinely understand global finance anymore. We understand certain large-scale features, and we understand certain minuscule details. But the middle ground, where most of the day-to-day action is? It’s mostly a mystery. Financially speaking, we are all willing slaves of a capricious and uncaring master.