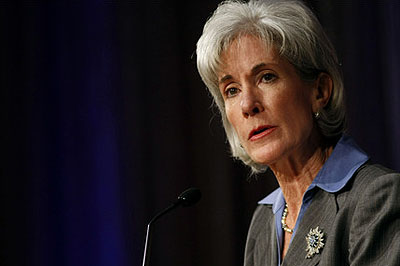 recommendation to make the Plan B contraceptive available over the counter. Greg Sargent posts a copy of the letter at his site and then comments:

This letter — which is signed by Patty Murray, Barbara Boxer, Kirsten Gillibrand, Maria Cantwell and 10 male senators — is strongly worded stuff, particularly when directed at a Democratic president. It stops just short of accusing the Obama administration of deliberately ignoring science in making this decision. It also puts the administration in an awkward spot. Either it produces a scientific rationale that’s acceptable to these Senators, which will will be extremely difficult at best, or it will face more criticism for failing to justify its policy, reinforcing the sense that this Democratic administration abandoned science and put politics first.

The first best option obviously would have been to follow the FDA recommendation and simply allow OTC sales of Plan B. However, the second best option would have been to fess up. This is what happened in 1998 when the Clinton administration decided not to endorse needle-exchange programs. Chris Mooney provides the play-by-play:

In 1998, Health and Human Services Secretary Donna Shalala fully acknowledged the science up front. “We have concluded that needle-exchange programs…will decrease the transmission of HIV and will not encourage the use of illegal drugs,” she stated, even as she went on to explain, awkwardly, that the programs would not be supported: “We had to make a choice. It was a decision. It was a decision to leave it to local communities.”

In contrast, the Bush administration simply twisted the science. In an extraordinary February 2005 editorial, the Washington Post revealed that to justify the decision to oppose needle-exchange programs (which are especially disliked by religious conservatives), a Bush official directed the paper “to a number of researchers who have allegedly cast doubt on the pro-exchange consensus.”

In this case, the Bush administration deliberately tried to mislead the Post about the scientific evidence on needle-exchange programs. The Clinton administration simply admitted that it was making a policy decision.

The Obama administration ought to do the same here. There’s a perfectly reasonable case to be made that even if Plan B is safe, the Obama administration doesn’t believe it’s appropriate to make it available to young children without their parents’ knowledge. That’s a policy decision, and everyone accepts that policy doesn’t have to be dictated solely by science.

Sebelius would be well advised to give up on trying to twist the science and simply admit that there were other considerations at work. It might not make Plan B fans any happier, but at least it would be more honest.