I’m so late to this story that I might as well be blogging about the evils of the tin trust or something, but there’s an aspect of the whole Emma Sullivan story that I don’t get. Emma Sullivan, of course, is the Kansas teenager who went on a field trip to 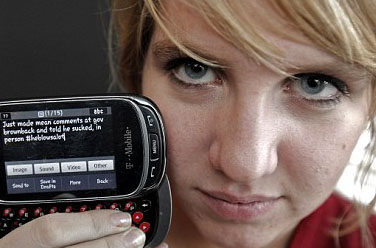 the state capitol, listened to some remarks from Governor Sam Brownback, and tweeted:

Just made mean comments at gov. brownback and told him he sucked, in person #heblowsalot.

The governor’s staff went ballistic, Sullivan’s school principal demanded she apologize, the governor and the principal eventually backed down, Sullivan became an internet hero for a few minutes, and Ruth Marcus was appalled. “If you were my daughter,” she wrote in the Washington Post, “you’d be writing that letter apologizing to Kansas Gov. Sam Brownback for the smartalecky, potty-mouthed tweet you wrote after meeting with him on a school field trip.”

But forget all that for a moment. Forget the overreaction from the authorities, Sullivan’s unlikely stardom, or Marcus’s fainting couch performance. What I’m curious about is this: does anybody seriously have a problem with a teenager saying that somebody sucks? Or blows? That doesn’t even qualify as crude language these days, let alone foul language, does it? It’s just everyday teenager language. Am I mistaken to think that you could say something sucks in a high school classroom and not even get a titter, let alone a smackdown from most teachers? What am I missing here?