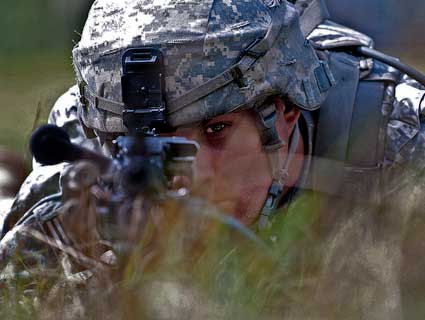 The Economist‘s Roger McShane is unimpressed with all the doom-mongering over proposed cuts to the Pentagon budget:

So by how much will the defence budget decline over the next decade? That could be seen as a trick question, because in nominal terms it will grow. Prior to the supercommittee’s failure, the defence budget was slated to increase some 23% between 2012 and 2021. Now, according to Veronique de Rugy, the Pentagon will have to make do with a 16% boost…Or to put it another way, as Lawrence Korb does, the “sequestration will return defense spending in real terms to its FY 2007 level, the next to last year of the Bush administration, when no one was complaining about devastating levels of spending.”

…But these numbers have not quieted the critics. And perhaps the most ardent among them has been [Defense Secretary Leon] Panetta. My colleague cites a statement from the secretary, in which he lists the tragic results of a 16% increase: “We would be left with our smallest ground force since 1940, the fewest ships since 1915 and the smallest Air Force in its history.” Here’s another fact: America already has the fewest ships since 1916, despite a 70% increase in defence spending between 2001 and 2010.

We could, of course, have thousands of ships and tens of thousands of warplanes if we wanted. But that would mean buying lots of PT boats and swarms of F-4s instead of a dozen Nimitz- and Ford-class supercarrier groups and a few hundred F-35s. We don’t have a small number of ships and planes because we’re too cheap to buy more, we have them because that’s what the Pentagon wants. Modern war makes a small number of superadvanced weapons systems more effective than a bunch of cheap cannon fodder.

Defense hawks like to insist that we should judge the Pentagon budget as a percentage of GDP. The Bill Kristol contingent, for example, claims that we should never allow defense spending to fall below 4 percent of GDP. But is this a sensible way of looking at things? For some programs it is. Social Security and Medicare, for example, are both inherently tied to population growth and living standards, so as those go up so will outlays. But 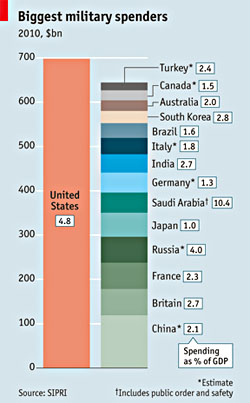 in other areas this doesn’t make so much sense. Do we need more embassies overseas just because our GDP has grown? Not really. There will be some increase in wages that’s tied to economic growth, but that’s about it.

National defense falls into this category. The United States is no harder or easier to defend when our economy grows, so it’s foolish to pretend that defense spending as a percentage of GDP should remain constant. It should go up when we’re at war, or when external threats are high for some reason, and it should go down in other times.

This is one of those other times. Despite the best efforts of defense hawks to jangle nerves over China, the plain fact is that China remains a minuscule military threat and probably will remain so for the foreseeable future. We aren’t going to start a land war in Asia, after all. Spending on cybersecurity will increase in the future, but it’s still a nit in the grand scheme of Pentagon spending. On other fronts, Al Qaeda is all but dead, and our wars in Iraq and Afghanistan are winding down. We’ll continue to keep troops in the Middle East and (for better or worse) we’ll continue with our drone wars in Pakistan, Yemen, and elsewhere. But those are pretty cheap. As scary as terrorism might be, the fact is that it’s primarily an intelligence expense. On a pure military basis, it’s simply not a big-ticket threat.

So can we afford to reduce defense spending to 2007 levels? Of course we can. The world is not more dangerous today than it was in 2007, and there’s no a priori reason it should cost more to defend the security of the United States today than it did in 2007. We might spend that money differently, of course. Perhaps the Pentagon will decide it would rather have a thousand more drones instead of a single additional supercarrier group. That might well make sense since the mission of supercarrier groups is becoming fuzzier all the time in an era of primarily asymmetric warfare.

The supercommittee sequestration will require the Pentagon to find additional cuts of about $50 billion per year in its budget. To pretend that this would make us virtually defenseless is to insult our collective intelligence. We can make that cut and still have the most powerful military on the planet by a factor of five or six. If that doesn’t make you feel safe, nothing will.