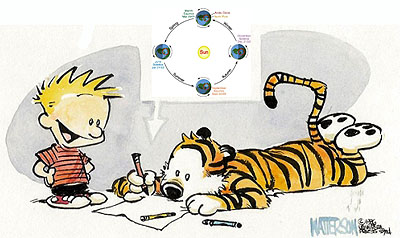 Brad DeLong reprints this old piece of dialogue from Calvin and Hobbes:

Calvin: Since September it’s just gotten colder and colder. There’s less daylight now, I’ve noticed too. This can only mean one thing — the sun is going out. In a few more months the Earth will be a dark and lifeless ball of ice.

Dad says the sun isn’t going out. He says it’s colder because the earth’s orbit is taking us farther from the sun. He says winter will be here soon.

Isn’t it sad how some people’s grip on their lives is so precarious that they’ll embrace any preposterous delusion rather than face an occasional bleak truth.

Just out of curiosity, I wonder how many people believe that the reason it gets colder in winter is because the Earth is farther away from the sun? This despite the well-known fact that it’s currently getting warmer in Australia.

I would like someone to do a survey on this topic. Thank you very much for your consideration.