Andrew Sullivan has a longish cover story in Newsweek arguing that both conservatives and liberals attack Barack Obama in dumb ways. Conservatives are convinced he’s a fire-breathing socialist out to destroy capitalism and appease our foreign enemies at every turn. This is little short of deranged, and Sullivan does a nice job of taking it apart.

Likewise, the progressive base convinced itself early on that Obama was a committed leftist and has since excoriated him for selling out now that he’s in office. But I agree with Sullivan: Obama simply never sold himself that way. He was, from Day One, a pragmatic, cautious, mainstream Democrat, and anyone watching the 2008 campaign with both eyes open should have understood that. He may be less liberal 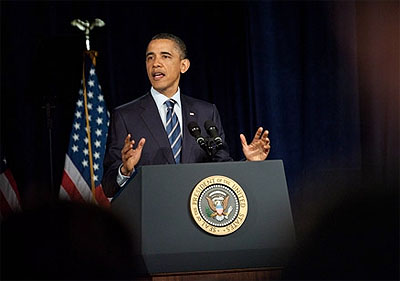 than a lot of us would like, but anyone who’s disappointed because he turned out not to be the second coming of FDR was just deluding themselves from the start.

But Sullivan loses me here:

By misunderstanding Obama’s strategy and temperament and persistence, by grandstanding on one issue after another, by projecting unrealistic fantasies onto a candidate who never pledged a liberal revolution, [liberals] have failed to notice that from the very beginning, Obama was playing a long game. He did this with his own party over health-care reform. He has done it with the Republicans over the debt. He has done it with the Israeli government over stopping the settlements on the West Bank—and with the Iranian regime, by not playing into their hands during the Green Revolution, even as they gunned innocents down in the streets. Nothing in his first term—including the complicated multiyear rollout of universal health care—can be understood if you do not realize that Obama was always planning for eight years, not four.

This is sort of a watered-down version of the 11-dimensional chess hosannas that deservedly got a lot of mockery back in the day. But it wasn’t true of Obama then (both his campaign and governing strategies have been fairly straightforward) and it’s not necessary to explain anything now.

Why was Obama so conciliatory toward the Republican Party early on? It has nothing to do with long-term strategy. It’s because he needed at least two or three Republican votes in the Senate to pass anything, and if he’d been a fire-breathing partisan from the start he wouldn’t have gotten them. He went down this road partly out of native temperament and partly because he didn’t really have any choice.

Why did health care reform take so long? Not because of any clever strategy on Obama’s part. It was because, right or wrong, he made a rational calculation not to repeat Bill Clinton’s mistakes. So instead of pushing a plan of his own, he let Congress take the lead. And Congress decided to move very, very slowly.

Why was Obama’s reponse to the financial crisis basically pretty centrist? Again, not because of any long game. More likely, it’s because Obama himself is genuinely fairly centrist and business oriented when it comes to financial policy.

What explains Obama’s strategy toward Israel and its West Bank settlements? I’m not even sure what the argument for a long game is here. The more prosaic—and probably correct—explanation is that Obama failed. He tried to press Netanyahu on the settlements because he thought he had the leverage to make him listen. He turned out to be wrong, plain and simple.

Why is Obama now taking a harder, more partisan approach toward his GOP adversaries? Not because he was cleverly playing with them for three years and is now reaping the rewards of an electorate convinced that Republicans are hopelessly obstructionist. In fact, surveys don’t suggest that public opinion has moved much in Obama’s direction at all. Rather, he’s doing it because it’s an election year. It’s now time for contrast, not compromise. This is Campaigning 101.

There are a few examples where I think Obama has indeed played a deliberately patient game that’s paid off. Don’t Ask, Don’t Tell is one: Doing it his way made repeal far less divisive and far more permanent than if he’d tried to hurry it through. Likewise, his policy toward Iran has been deliberately devised to demonstrate that he’s trying his best to be reasonable and is only tightening sanctions as a last resort. This has successfully kept China and Russia from being obstructionist and produced a better, more global sanctions regime than he otherwise would have gotten.

But these are the exceptions, not the rule. For the most part, Obama’s actions can be explained without resort to mysterious and ulterior motives. He’s done what he’s done sometimes out of native temperament, sometimes out of straightforward political calculation, sometimes out of plain misjudgment, and sometimes because he genuinely has more centrist views than his critics want to believe. More than with most presidents, I think that with Obama, what you see is what you get. He’s just not that hard a guy to explain.