So what happens after Tuesday if, as expected, Mitt Romney wins a convincing victory in Florida? John Heilemann tagged along as Newt Gingrich visited a couple of Florida churches today (his appraisal of the second visit: “By no small margin, it was the worst and saddest campaign event that I have witnessed in this presidential cycle”) and reports that Newt is promising to keep running all the way to the end no matter what happens:

Pledges to continue the fight unabated in the face of harsh and/or humiliating outcomes are staples of presidential campaigns. And they are also patently meaningless….But in Gingrich’s case, he might be serious, so much has he come to despise Romney and the Republican Establishment that has brought down on him a twenty-ton shithammer in Florida, and so convinced is he of his own Churchillian greatness and world-historical destiny. The same antic, 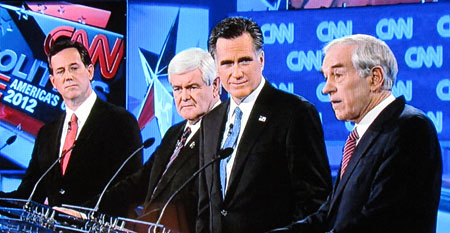 manic, lunatic bloody-mindedness that has made him such a rotten candidate in the Sunshine State may be enough to keep him the race a good long time.

This strikes me as….surprisingly plausible. And you know what? Rick Santorum strikes me the same way. He’s a true believer who’s always been in this more for the attention than because he really thinks he has a chance to become president, and people like that can keep going forever. And of course, we already know that Ron Paul will stay until the bitter end.

I don’t know how likely this is, but it’s at least possible that all four of the current candidates will keep running all the way to the convention. But here’s the real question: if Romney builds up a big enough head of steam, he’ll declare victory and withdraw from future debates. Without Romney, no one will be much interested in airing the debates, and no one would watch them even if they were aired. So all three of the also-rans would have to keep up their campaigns even though they weren’t getting regular time to yak on national TV and the press corps was no longer taking the race seriously.

Would they do that? I can hardly believe they would, but I guess you never know.