I see, via Andrew Sullivan, that Will Wilkinson and Reihan Salam are arguing about whether it would be a good idea to increase tax incentives for having children. Will opposes it because he doesn’t think the government has any business intruding here in the first place, and Reihan favors it because he favors pro-natal policy in general. “On the whole,” says Reihan, “I’d rather we subsidize child-rearing than the purchase of large homes in capacity-constrained regions or high-tax jurisdictions at the expense of low-tax jurisdictions.”

Put that way, I guess maybe I’d agree. But before this argument goes much further, it might be worth asking whether changes to the tax code have any real impact on childbearing in the first place. Our philosophical predispositions don’t matter much if the empirical evidence tells us not to care.

And it seems like that’s what it tells us. An influential paper a couple of decades ago suggested that tax policy really did have an effect on fertility rates, but two decades and some big changes in tax policy have gone by since then. A couple of years ago a trio of researchers at NBER recrunched the numbers and found that the original paper relied on a couple of critical assumptions that most likely aren’t true. And even if they are true, “there is some evidence that child tax bene?ts affect the timing of births, but ?nd no evidence of any lasting fertility effects.”

Chart below. Do you see any effect from the skyrocketing level of child tax subsidies over the past couple of decades on the general fertility rate? I sure don’t. If you want to reward people for having children just because you think it’s the right thing to do, that’s fine. But if you’re actually trying to affect the number of kids we have, the evidence suggests it simply doesn’t make any difference. 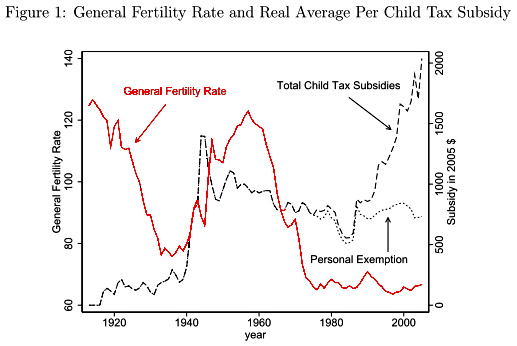