Today’s chart comes from Charles Kurzman of the Triangle Center on Terrorism and Homeland Security. It shows the steady decline over the past decade in indictments for support of terrorist attacks in the United States: 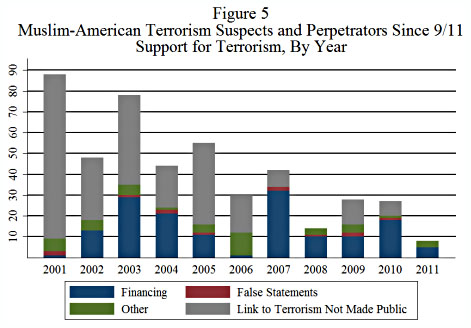 The number of violent plots carried out by Muslim-Americans was also down substantially in 2011, and virtually all of them were disrupted early. From the report: “Of the 20 Muslim-Americans accused of violent terrorist plots in 2011 only one, Yonathan Melaku, was charged with carrying out an attack, firing shots at military buildings in northern Virginia. Nobody was injured.”

This comes via Dan Drezner, who notes some recent remarks by a Pentagon official that we might have been overestimating al-Qaeda’s capabilities all along. Then some snark:

Now, I’m sure that the reason for this lull is that Al Qaeda’s remaining assets in the United States are focusing their energies on getting all turkeys to become halal or something. That said, I’m going to continue to insist that the United States faces a much less threatening threat environment now than it did fifty years ago. Oh, and that I don’t need to listen to Representative Peter King when he opens his mouth on national security issues.

Nobody is suggesting that the threat of homegrown attacks is zero. But it’s very much a manageable, garden-variety law enforcement problem at this point. It’s way past time for everyone to dial down the panic.