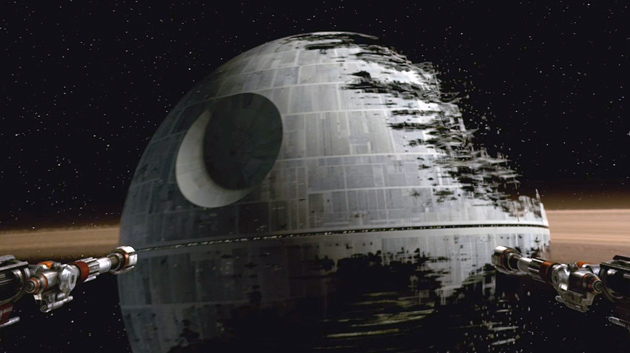 There’s been a lot of loose talk about the Death Star lately. I want to put it into a bit of perspective.

As background, some students at Lehigh University have estimated that it would be a very expensive project. The steel alone, assuming the Death Star’s mass/volume ratio is about the same as an aircraft carrier, comes to $852 quadrillion, or 13,000 times the world’s GDP. Is this affordable?

Let’s sharpen our pencils. For starters, this number is too low. Using the same aircraft carrier metric they did, I figure that the price tag on the latest and greatest Ford-class supercarrier is about 100 times the cost of the raw steel that goes into it. If the Death Star is similar, its final cost would be about 1.3 million times the world’s GDP.

But there’s more. Star Wars may have taken place “a long time ago,” but the technology of the Star Wars universe is well in our future. How far into our future? Well, Star Trek is about 300 years in our future, and the technology of Star Wars is obviously well beyond that. Let’s call it 500 years. What will the world’s GDP be in the year 2500? Answer: Assuming a modest 2 percent real growth rate, it will be about 20,000 times higher than today. So we can figure that the average world in the Star Wars universe is about 20,000 times richer than present-day Earth, which means the Death Star would cost about 65 times the average world’s GDP.

However, the original Death Star took a couple of decades to build. So its annual budget is something on the order of three times the average world’s GDP.

But how big is the Republic/Empire? There’s probably a canonical figure somewhere, but I don’t know where. So I’ll just pull a number out of my ass based on the apparent size of the Old Senate, and figure a bare minimum of 10,000 planets. That means the Death Star requires .03 percent of the GDP of each planet in the Republic/Empire annually. By comparison, this is the equivalent of about $5 billion per year in the current-day United States.

In other words, not only is the Death Star affordable, it’s not even a big deal. Palpatine could embezzle that kind of money without so much as waving his midichlorian-infused little pinkie. If it weren’t for the unfortunate breakdown in anti-Bothan security and the shoddy workmanship on the thermal exhaust ports, it would have been a pretty good investment, too. In other words, yes: totally worth it.

UPDATE: Rewritten once, then twice, to make it absolutely crystal clear that Star Wars took place “a long time ago” but that its technology is quite a ways into our future. Everyone happy now?

UPDATE 2: Apparently the canonical figure for the size of the Republic/Empire is 1.75 million full member worlds. Needless to say, this makes the Death Star even more affordable.

Editors’ Note: This post spawned a number of high-caliber comments from our readers, and we’ve been nerding out on the great gags and trekkie humor. Here’s a few you should not miss, lightly edited for clarity:

“Come on! They built one for the movie! That didn’t cost 1.3 billion times the planet’s GDP! Or did it? Is that what caused the housing crisis?

On that same note, the Death Star is not something we’d need while we have bankers. Just infiltrate a couple of bankers onto a planet and kablam! whazoop! the planet is destroyed. “

“Build the Death Star you will.  With workers from Tatooine who unemployed they are.  But Jedis’s health care coverage — even those for the Dark Side — covers contraception.  Difficult will it be to provide a sufficient work force to maintain your weapon.”

Kevin Drum: Yeah yeah. Fine. I’ve cleaned up the language. And now off to the sand pit of the Sarlacc with you.

“There may be a bit of a PR problem here: Death Star isn’t testing well as a name. Given that it’s the size of a moon, why not build in some leisure facilities from the start. You’re more likely to get funding if you market it as a great holiday destination that will end unemployment and just happens to be capable of blowing up planets.”

“‘If it weren’t for the unfortunate breakdown in anti-Bothan security and the shoddy workmanship on the thermal exhaust ports, it would have been a pretty good investment, too. In other words, yes: totally worth it.’

Well, that’s what happens when your procurement rules require going with the lowest bidder.

SOME things are eternal.”

“Have you SEEN The Corbomite Maneuver? Kirk already won that battle.”