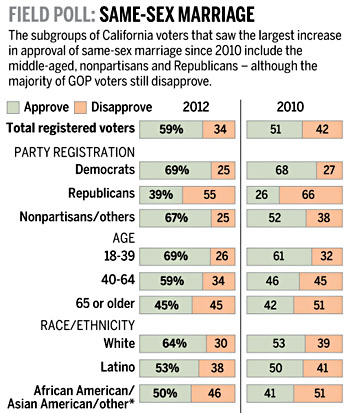 Back in 2008, after the passage of Proposition 8 banned gay marriage in California, there was a lot of talk about putting a pro-marriage initiative on the ballot in 2010. That didn’t happen, and my read of public opinion at the time suggested we’d be better off waiting a little bit to ensure victory. Time was on our side, after all.

This may all be moot if Prop 8 gets overturned by the Supreme Court, but in any case, it looks like the success of same-sex marriage laws in other states has had a galvanizing effect on California public opinion. According to the Field Poll, about 51 percent of Californians approved of gay marriage in 2008, and that number hadn’t budged much by 2010. But their latest poll shows a huge shift: 59 percent of Californians now approve.

What’s even better is that this shift crosses virtually every demographic groups. Democrats are already strongly in favor, but approval rose 13 points among Republicans and 15 points among independents. Approval rose among the young, the middle-aged, and even the elderly. It rose among whites, Latinos, and blacks. It rose among Protestants, Catholics, and atheists.

There are no efforts in place to repeal Prop 8 via a ballot measure this year, and we might not need one. But if we do, it looks like it would pass easily this time around. Other states have taken the lead, and guess what? The four horsemen didn’t ride. Apparently people are finally getting the message that there’s really nothing to be afraid of here.