Earlier this morning I was emailing with Stuart Staniford about America’s social fabric and whether it was declining. He noted that self-reported happiness hasn’t changed much over the past few decades, which might suggest that there hasn’t been much decline after all. But we both agreed that this doesn’t mean much since practically nothing seems to change happiness levels. They just rumble along forever at about the same level.

At least, that’s the case in most countries. But it turns out there are events short of war that can have a significant effect. Behold Greece: 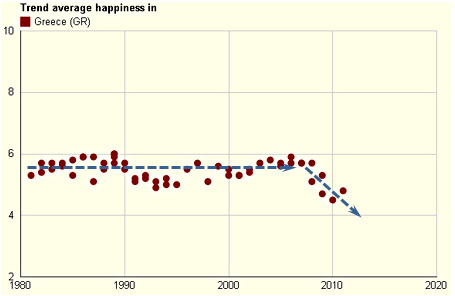 As it happens, Greeks weren’t all that happy even before their financial collapse. Most European countries score consistently above six, and some score well above that. But if the Greeks were (contrary to stereotype) slightly disconsolate over the past few decades, they’ve been practically suicidal ever since the austerity madness prompted by the 2008 financial collapse. They aren’t quite as bad off as the dirt-poor, HIV-ravaged African nations that usually rank at the bottom of these lists, but as near as I can tell Greece is now the unhappiest nation in Europe.