Ed Kilgore points me today to a quirky new PPP poll that asks people if they have favorable or unfavorable views of the various states. Hawaii gets the highest number of favorables and Illinois gets the lowest. However, if you look at the delta between favorable and unfavorable, my poor home state ranks last (27% favorable vs. 44% unfavorable). It turns out that a lot of this is driven by partisan animus:

Democrats’ favorite states include Hawaii, Massachusetts, Oregon, Washington, Vermont, Colorado, and New York, and their least favorites are led by Texas, Alabama, and Mississippi. Republicans love Alaska and Texas, and absolutely hate California, followed distantly by Illinois and Massachusetts.  So the greatest partisan gap is for California, which Democrats like 91 points more than Republicans do, followed by Texas, which is favored more by Republicans by 82 points. 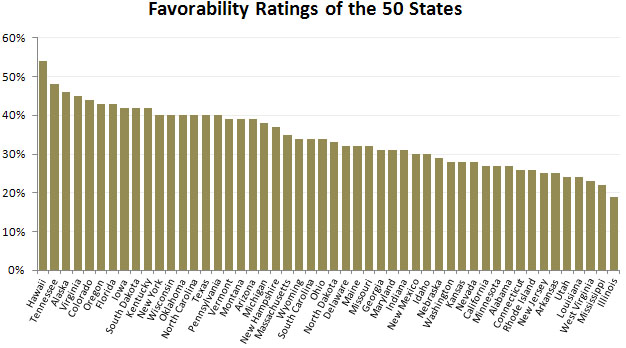