In the current issue of MoJo, Mac McClelland has a cover story, “I Was a Warehouse Wage Slave,” about life in a gigantic distribution center that fulfills online orders from some unnamed location in the rural heartland of America. Mac worked as a “picker,” someone who dashes around the warehouse and fills up plastic tubs with the specific stuff people have ordered. In days of olde, you did this by referring to a piece of paper called a pick list, but modern warehouses have automated the whole process. In Mac’s warehouse, a mobile scanner unit told her what items to get and where to find them, and then marked 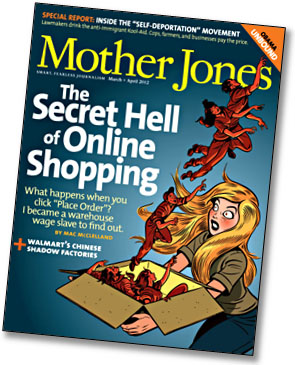 each item as completed after she scanned it and put it on the conveyor belt to the packing/shipping department.

As you will learn if you read Mac’s piece, this is grueling, physical work. You work ten-hour days, you have a quota that requires you to jog through the warehouse the entire time, lunch and potty breaks are short, the temperature is often either stifling or freezing, and there’s no real prospect of advancement. Oh, and the pay is pretty crappy too. People don’t much like working there.

I was reminded of Mac’s story Friday night as Marian and I watched the latest episode of Undercover Boss. This is an occasional guilty pleasure, fascinating to me because of the particular morality play that unfolds each week. Basically, the CEO of some large-ish corporation dons a disguise and goes out to toil among the common laborers who work for his company. It’s kind of a weird cross between The Prince and the Pauper and Queen for a Day. The boss is typically portrayed as a well meaning but clueless type who eventually comes to appreciate the virtues of the working man (that’s the Prince and the Pauper part1), and at the end of the show each employee he’s come into contact with is let in on the ruse and given a raft of cash and prizes to help make their working-class lives a little more tolerable (that’s the Queen for a Day part).

Friday’s episode starred Sam Taylor, CEO of Oriental Trading Company, a huge direct seller of craft and party supplies. Taylor loves OTC because its products are “fun,” and he’s enamored with the idea of running a company that’s dedicated to helping people have fun. And here’s the thing: Taylor seems like a perfectly decent guy. Not a moron, not a monster, not a Gordon Gekko.

And yet: when he went to work for a few hours as a trainee picker in OTC’s warehouse, he was genuinely shocked to learn that Troy, the guy who shows him the ropes, really doesn’t like his job much. Taylor thinks jobs at OTC ought to be fun! Marian and I, who have both worked in manufacturing environments (though never on the floor as pickers), were just sitting there agog. I mean, even in a great company, being a picker isn’t any fun and doesn’t pay much. Nobody in his right mind actively enjoys the work. It’s a way to put food on the table and not much more.

The same thing happened in Taylor’s next job, loading boxes into a truck. Not much fun! Packing up finished orders? Not much fun! Scanning stuff and tossing it onto OTC’s (admittedly very cool) automated conveyor belt? Not much fun!

This isn’t to say there’s anything wildly wrong with OTC. There’s no way to tell from the edited bits on the show. But it’s a distribution company. Most of the warehouse work is physically demanding, all of it boring, it’s uncomfortable when temperatures get into the 90s, and the supervisors expect you to keep up a brisk pace no matter what job you have. Not much fun!

Kathleen Geier, guest blogging at the Washington Monthly this weekend, quotes Corey Robin on this subject:

I wish academics, journalists, intellectuals, and bloggers had a more concrete sense of what it’s like to work in an actual workplace in America (not to mention elsewhere). Sometimes, it seems that scholars and writers, if they think about it at all, simply assume the typical workplace to be a seminar room, a newsroom, the cafe around the corner, or their office at home.

Well, maybe not quite that bad. But he has a point. I figure I lead about as sheltered a life as anyone not born into great wealth can lead, but hell, even I have a nodding acquaintance with what a warehouse is like. If I were CEO of a company where distribution was a mission critical part of my operation, I expect I’d have an even better idea. But Sam Taylor apparently didn’t. And I imagine there are a lot more like him.

Lots of work is inherently tedious and low paying. That’s true even at companies that treat their workers pretty well. No one should be surprised that low-paid warehouse workers don’t like their jobs much, just as nobody should be surprised that they aren’t very excited about the prospect of retirement ages going up. Retiring at age 70 is fine for talking heads and newspaper columnists, who basically like their work and get paid pretty well, but not so fine for someone whose job is hustling around a warehouse eight hours a day picking stuff off of shelves and tossing it into plastic tubs. Some of the talking heads and columnists who blather on about this probably ought to watch Undercover Boss once in a while. They might learn as much as Sam Taylor did.

1In The Prince and the Pauper, a young prince trades places with a peasant boy and learns what the world looks like from the bottom up. At the end, the switcheroo is corrected and everyone who treated the prince well is richly rewarded. However, although the prince learns a personal lesson from all this, nothing of any real consequence changes in the kingdom and life still sucks for most of the workers. This is almost precisely how Undercover Boss plays out each week.