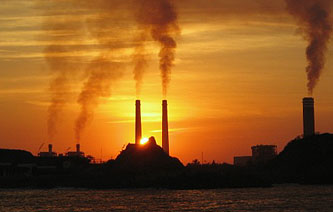 The new rules will mandate that all new power plants generate no more than 1,000 pounds of carbon dioxide per megawatt of electricity produced. That’s a standard that your basic renewables can of course easily meet as can nuclear plants. It also conveniently draws the line such that natural gas, whose price has plummeted lately amidst the North American Fracking Boom, fits in under the standard as average gas-fired plants emit between 800 and 850 pounds per megawatt. But coal plants on average emit almost 1,800 pounds per megawatt, way outside of the acceptable range. The result is that barring some miraculous new innovation in the creation of cost-effective carbon sequestration technology, there aren’t going to be any more coal-fired plants built in the United States. The face of new fossil fuel based electricity will be gas (which is considerably cleaner than coal), and the alternative to gas in the event that the gas boom ends will be renewables.

Back in 2010, the power industry was in the middle of a boom in construction of coal-fired plants. “Building a coal-fired power plant today,” said Severin Borenstein, director of the Energy Institute at the University of California at Berkeley, “is betting that we are not going to put a serious financial cost on emitting carbon dioxide.” And that was a good bet! In fact, cap-and-trade legislation had collapsed earlier that year amid mutual recriminations, which meant that putting a price on carbon was dead for the forseeable future.

But in the long run, power companies were just trying to beat the clock. One of the most compelling arguments in favor of cap-and-trade was simple: it’s better than allowing the EPA to hand down a bunch of hamhanded command-and-control rules, but if cap-and-trade fails, that’s exactly what will happen. And guess what? That’s exactly what’s now happened.

So it was a good bet, all right, and power companies were smart to get started on as many coal-fired plants as they could. They knew that any plants they built would be profitable as long as carbon emissions remained unregulated, and they also knew that EPA would likely shut down the construction boom for good before long. So it was build, baby, build. We’ll be paying the price for this for years to come.