The state of Texas recently adopted a law that requires residents to present photo ID at the polling place before voting. These kinds of laws are problematic even in the best cases, but Texas being Texas, their law is almost laughably brazen in its intentions. For example, in addition to driver’s licenses, the law specifies that military ID and handgun permits are acceptable forms of identification; specifies that student IDs aren’t acceptable forms of identification; and automatically qualifies elderly voters to cast mail-in ballots, which require no ID. In other words, the law does its best to make voting easy for every possible identifiably Republican-leaning constituency and hard for every possible identifiably Democratic-leaning constituency.

And those are just the identifiable Democratic constituencies. There are others that, for pesky legal reasons, can only be indirectly targeted: primarily blacks, Hispanics, and the poor. These constituencies lack photo ID at higher rates 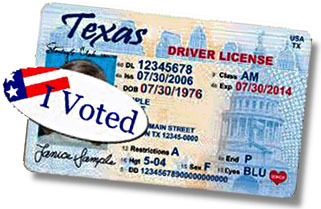 than white, middle-class voters, and this is what the Justice Department homed in on today when it put the Texas law on hold:

….An applicant for an election identification certificate will be required to provide two pieces of secondary identification, or one piece of secondary identification and two supporting documents. If a voter does not possess any of these documents, the least expensive option will be to spend $22 on a copy of the voter’s birth certificate….As noted above, an applicant for an election identification certificate will have to travel to a driver’s license office. This raises three discrete issues. First, according to the most recent American Community Survey three-year estimates, 7.3 percent of Hispanic or Latino households do not have an available vehicle….Second, in 81 of the state’s 254 counties, there are no operational driver’s license offices….The third and final point is the limited hours that such offices are open. Only 49 of the 221 currently open driver’s license offices across the state have extended hours.

The second paragraph here is a key one. Lots of people assume that getting photo ID is no big deal. Most people have it, and even the ones who don’t can easily get it. After all, it’s free! But that’s not true. First, you need a birth certificate. Middle-class folks might not realize this, but not everyone has a birth certificate handy, and both the hassle factor and the cost of getting one can be real deterrents. Add to that the hassle of getting a ride to a DMV office two counties away during working hours, and voting in the next election suddenly got a whole lot harder for you than it is for your average middle-class white suburbanite. You might even never get around to it.

Which, of course, is the whole idea. Kudos to the Justice Department for pointing that out and doing the right thing here by putting the Texas law on hold.