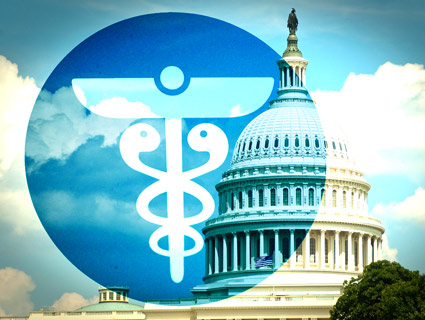 Can the government provide healthcare more efficiently than the private market? There’s no simple answer to that, but a couple of recent data points suggest the answer is yes.

First there’s Medicare. It’s true that long-term Medicare costs remain our most critical budget problem, thanks to aging baby boomers and ever-expanding treatments for chronic illnesses and end-of-life care. But per-capita Medicare spending has been on a long downward trend, and that trend has been so steady and predictable that a recent study suggested that spending growth per beneficiary over the next decade would be close to zero. Earlier this week we got some confirmation of this when the annual Social Security Trustees report was released. Most of the media attention focused on Social Security, whose financial position deteriorated compared to last year thanks to a slowing economy and an aging population. But using the same economic forecasts, the trustees nonetheless projected no deterioration in Medicare’s financial picture. Why? “Once you dig into the numbers,” says the Washington Post’s Sarah Kliff, “the most plausible explanation is a pretty encouraging one: Our health-care system is getting better at delivering the same medicine more efficiently.”

And there’s more. On Wednesday, Austin Frakt and Aaron Carroll reported on a new study of Medicaid spending by states. Despite years of horror stories about Medicaid bankrupting state budgets, the study found that most of the increase over the past decade has simply been due to inflation and population growth, not the rising cost of medical care. Adjusted 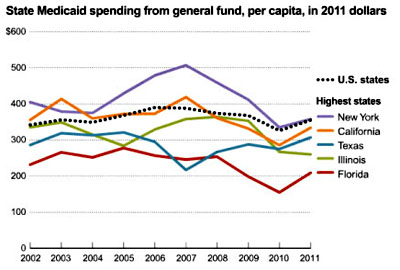 for inflation and population, it turns out that Medicaid spending rose by less than 4% between 2002 and 2011. (That’s the dotted line in the chart on the right.) Why has Medicaid done so well? The study quotes Vernon Smith, former Medicaid director for Michigan:

When you look at the rate of growth for all the major payers — Medicaid, Medicare, employer-sponsored insurance, National Health Expenditures — what you see is that no other payer has constrained the rate of growth in spending as well as Medicaid has. [] The reason is that no payer has been as motivated to undertake cost containment as state governments.

This is a key insight, and it doesn’t apply only to state governments. One of the problems with the employer-centered healthcare model that we adopted accidentally during and after World War II is that it does a pretty good job of hiding costs. Sure, our premiums and copays rise every year, but most of us have very little idea how much our medical insurance really costs. We pay a small portion, and the rest is, from our point of view, effectively free. By contrast, in European countries, which have done a much better job of controlling costs than the U.S., spending comes largely out of tax dollars, which means that legislatures and taxpayers have to face up to the cost of healthcare every year when they pass a budget. The fact that the process is played out in the rough and tumble of the political spotlight gives everyone a strong incentive to hold down spending. After all, rising costs mean rising taxes.

Until the cost of medical care bites, Americans won’t put a lot of pressure on the healthcare industry to rein in its prices and administer care more efficiently. Taxpayer-supported national healthcare could help us get there. The relative efficiency of Medicare and Medicaid are bellwethers we should pay attention to.