One of the big criticisms of Paul Ryan’s budget plan is that he’s eager to specify how much he’d lower tax rates, but not so eager to explain which loopholes and deductions he’d close in order to keep everything revenue neutral. He just casually fobs that off on the Ways and Means Committee. Philip Klein wishes that his fellow conservative were more forthcoming:

I think it’s a fair criticism of Rep. Paul Ryan and Mitt Romney that the tax reform in their budget plans does not specify the loopholes that they plan to close to offset their planned rate reductions. I’ve taken issue with this and have urged Republicans to be more open about what type of favored deductions they’d get rid of, which have become cows as sacred as entitlements. This is something that Jon Huntsman deserves credit for doing in his presidential campaign — he vowed to eliminate every deduction, even popular ones on employer-based health insurance, mortgage interest and charitable giving.

Here’s why this is so important. Ryan’s proposed tax cuts are above and beyond the Bush tax cuts, which he wants to make permanent. According to the Tax Policy Center, this means that Ryan’s plan would cost an additional $400 billion in revenue in 2015. So to stay revenue neutral, he needs to eliminate deductions and tax credits worth about $400 billion. The technical name for all these deductions and credits is “tax expenditures,” and the table below, compiled from a recent report of the Joint Committee on Taxation, shows their estimates for the total value of tax expenditures in 2015: 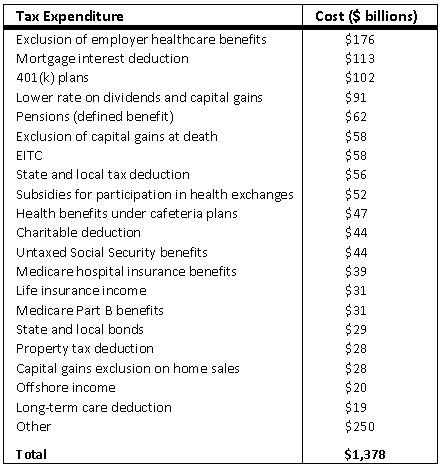 Do you see how hard this is? The big ticket items are things like taxing healthcare and pension benefits; the mortgage interest deduction; the Earned Income Tax Credit; the charitable contribution deduction; various state tax deductions; and exclusions for Medicare and Social Security benefits. Needless to say, those are going to be eliminated over a whole bunch of dead bodies. Other big ticket items include tax breaks on dividends, capital gains, inheritances, and offshore income, and all of those would be eliminated only over Paul Ryan’s dead body. There’s not a single thing in this entire table that wouldn’t be a stupendous political lift, and the prospect of eliminating not just one of them, but $400 billion worth of them, is very slim indeed.

That’s why it’s important for Ryan to put his money where his mouth is. You can’t plausibly claim that your tax cuts will be revenue neutral if that claim depends on a whole bunch of tax increases that are all but impossible politically. At the very least, you need to set out a marker so that everyone can judge just how palatable your preferred menu of increases is, and whether any of Ryan’s fellow Republicans are willing to face up to the political backlash of supporting it.

We already know they love the rate cut part of Ryan’s plan. Now it’s time to see if they’re willing to stand up and be counted on the tax increase part that goes along with it.