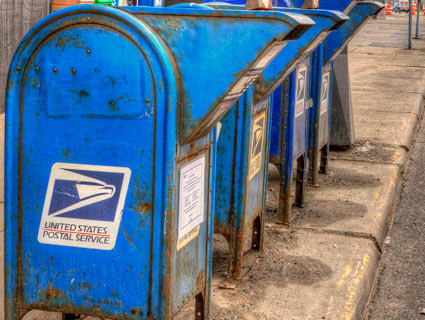 Hooray! Today the Senate passed a bipartisan bill to save the postal service. After plowing through half a dozen separate reports about what the bill does, I’ve compiled a comprehensive list. Take a deep breath:

Hmmm. Do you notice anything missing? Let me think.

Oh yeah: there’s nothing in there about allowing the postal service to increase postal rates. This is crazy. Take a look at countries around the world that have smaller volumes of mail than us: they all charge higher postage rates. They have to. And as volumes keep declining in America, we’re going to need higher rates here too. Right now, a first-class equivalent stamp runs 75¢ in Germany, 72¢ in Britain, 82¢ in France, 98¢ in Switzerland, 97¢ in Belgium, and 63¢ in the Netherlands. There’s no way that we can stay at 45¢ as volumes decline and pretend that somehow everything will be hunky-dory.

But allowing the price of a stamp to go up is apparently even more of a political taboo than closing rural post offices. I suppose Democrats are afraid of annoying granny and Republicans are so intent on busting the postal carriers union that they don’t like the idea of anything that brings in more revenue. We are ruled by idiots.