Consumer spending can increase if (a) wages go up, (b) borrowing goes up, or (c) savings are spent down. Jed Graham reports that last quarter it was Option C that saved the day:

U.S. households saved just 3.9% of disposable income in Q1, the lowest since the last cycle’s peak in Q4 2007. In fact, the decline in saving from 4.5% in Q4 financed half of all personal consumption gains in Q1, adding one full percentage point to real GDP growth.

Needless to say, saving rates can’t decline forever, and borrowing isn’t likely to increase much either. That leaves disposable income as our main hope for future economic prosperity, and 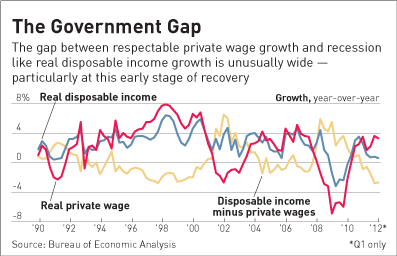 with job growth picking up, so should disposable income. So why isn’t it?

This time, government policy is the main culprit. Real disposable income growth has trailed real private wage growth by nearly 3% the past two quarters as fiscal stabilizers have gone into reverse….The drag on disposable income comes, in large part, from three factors: flat total wages for government workers; roughly flat government social benefits; and a normal cyclical boost in income and payroll tax payments (up a combined $151 billion from Q1 2011).

….The bottom line is that fiscal policy is leaning too hard against recovery based on present conditions. The question is whether such austerity is avoidable right now amid trillion-dollar deficits and pressure from the ratings agencies.

Oh, I think it’s avoidable. The problem isn’t either short-term deficits or Standard & Poor’s. It’s an excess of politicians who don’t really care much about the real-world economy. There’s no point in trying to blame anyone else.