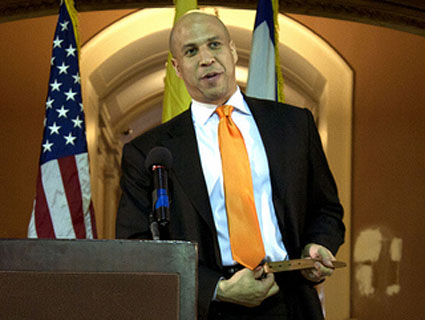 In case you’re wondering whether it’s a slow news Monday, the big news to come out of the Sunday shows last weekend was Newark Mayor Cory Booker saying on Meet The Press that he found the Obama campaign’s focus on Mitt Romney’s record at the private equity firm Bain Capital particularly “nauseating.” That’s sort of awkward, because at least theoretically Booker is supposed to be supporting Obama:

But the last point I’ll make is this kind of stuff is nauseating to me on both sides. It’s nauseating to the American public. Enough is enough. Stop attacking private equity, stop attacking Jeremiah Wright. This stuff has got to stop because what it does is it undermines, to me, what this country should be focused on. It’s a distraction from the real issues. It’s either going to be a small campaign about this crap or it’s going to be a big campaign, in my opinion, about the issues that the American public cares about.

Booker later released a YouTube video trying to walk the statement back.

“Mitt Romney has made his business record a centerpiece of his campaign,” Booker said in the video. “He’s talked about himself as a job creator. And therefore, it is reasonable, and in fact I encourage it, for the Obama campaign to examine that record and to discuss it.”

Booker’s reasoning is odd since the Obama campaign is directly attacking Romney’s record at Bain while the proposed Wright ad was associated with a pro-Romney Super-PAC. The premise behind the ad was that Obama’s presidency has been an act of revenge against white people stemming from the hatred Obama absorbed at Wright’s church. It’s hard to see the two as comparable, because Obama is directly responsible for the Bain attacks and Romney is not directly responsible for the Wright proposal. On the other hand, criticizing Romney’s business record is far more justifiable than the deranged premise of the Wright ad.

This isn’t the worst example of disloyalty or veering off message, but if you’re a Democrat who finds it “nauseating” to even discuss how some people end up needing the social safety net, you may be in the wrong party.