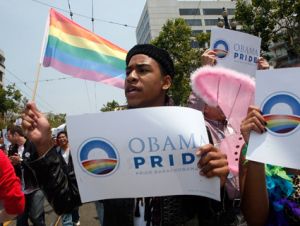 Black voters in Maryland have flipped on same-sex marriage, going from majority opposed to majority in favor in the space of two months. As I noted on Thursday, that means that Maryland could become the first state to approve of marriage equality by referendum.

So what does this say about the power of the bully pulpit? Empirical data suggests that presidential speeches rarely move public opinion in an affirmative direction, and may even harden it against whatever the president is proposing. The key shift on same-sex marriage, though, comes from a population that was already supportive of Obama. Political scientist John Sides points to an experiment that may shed some light:

Although the polling data thus far generally support the finding that presidents don’t move public opinion very much or very often, there is some reason to believe that Obama himself could move opinion among African-Americans. In a 1994 paper (gated), James Kuklinski and Norman Hurley conducted an experiment in which respondents read a statement urging African-Americans to demonstrate more self-reliance. The statement was attributed to Jesse Jackson, Clarence Thomas, George Bush, Ted Kennedy, or no one.

Among black participants, the most persuasive cue-giver was Jackson, following closely by…? Thomas…This is nothing unique to Jackson or Thomas or even African-Americans, of course. Sources of information are generally more credible when they are perceived as sharing our identities, values, etc.

I’m inclined to think that this doesn’t mean that Obama’s been holding out on magic pixie dust for influencing public opinion, but that this is a fairly unique circumstance in that black Americans, prior to Obama’s endorsement, were more likely to oppose marriage equality and really like Obama. The president has given many more public speeches in support of the Affordable Care Act than same-sex marriage, without moving the dial a notch. Also “really like Obama” is understating it a bit: the president is a singularly unique figure in the black community as a symbol of accomplishment and hope for a better future.

Another factor here is that I think opposition to same-sex marriage among black Americans is wide, but for the most part not particularly deep. This is why black legislators who support same-sex marriage don’t get punished at the polls. There’s also a partisanship factor at work here: As Jonathan Bernstein writes, “African American voters who really don’t care very much one way or another about the marriage issue — but do consider themselves on Team Democrat — are now aware that marriage equality is the normal position of that team.” I’d say that we saw similar psychological effect with Republicans and climate change.