The latest on gay marriage from the executive branch:

Vice President Joseph R. Biden said on Sunday that he was “comfortable” with same-sex marriages, a position that appeared to go beyond the “evolving” views that President Obama has said he holds on the issue. “I am absolutely comfortable with the fact that men marrying men, women marrying women and heterosexual men and women marrying one another are entitled to the same exact rights, all the civil rights, all the civil liberties,” Mr. Biden said in an appearance on NBC’s “Meet the Press.”

….Mr. Biden prefaced his remark in his NBC interview by saying, “The president sets the policy,” and his aides later indicated that the views he expressed were his own. The White House immediately suggested on Sunday that the vice president had articulated no change in the administration’s official 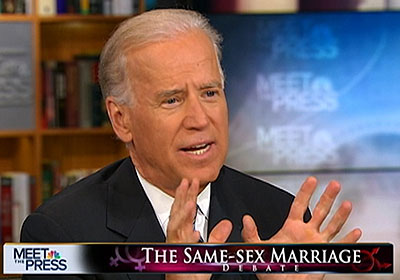 position on same-sex marriage. But gay rights advocates said that Mr. Biden’s remarks seemed to convey unmistakable support for their biggest cause.

Like a lot of liberals, I don’t believe that Obama really opposes same-sex marriage. He just considers it politically expedient to keep pretending otherwise.

If that’s true, it’s an interesting case study in the way the media has changed politics. In the past, presidents (and presidential candidates) had an easier time with this kind of tricky issue. They could say one thing to one audience and another thing to another. Or they could say one thing in public but then wink in the other direction in private. Those in the know understood what was going on, and often there was sort of a tacit agreement to keep the president’s “real” view private. It was a game, since the president might actually be scamming the insiders rather than the rubes, but it was a well-worn game.

But you can’t do that anymore. The internet and 24-hour news networks make it flatly impossible to say different things to different audiences. You can take a slightly different tone with different audiences, but that’s it. And even winking and nodding to insiders is dangerous. There’s simply no tacit agreement to keep this stuff private anymore, so your best bet is maintain iron self-discipline and never give anyone a peek behind the curtain. You stay on your talking points at all times and in all places.

And Barack Obama, whatever else you think about him, seems to have cast iron self-discipline. In that sense, he really does represent the future of politics. You can decide for yourself whether you like that future much.