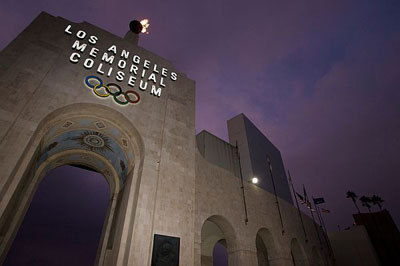 In the great scheme of things this is trivial, but if you want a good example of the inertia and idiocy of local government, here you go:

The state appeared to be ready to put the brakes on the Los Angeles Memorial Coliseum Commission’s proposed lease deal with USC on Wednesday, the same day the panel posted losses of more than $7 million since 2009.

….”The state won’t be rubber-stamping … what the commission has negotiated or agreed to. We’ve identified some concerns,” such as control of the property’s revenue-rich parking lots, said Anna M. Caballero, Brown’s secretary of the State and Consumer Services Agency and the governor’s point person on the Coliseum issue….Later in the day, the Coliseum Commission released financial statements showing losses of $2.4 million in fiscal 2009-10 and $4.8 million the next year.

Yeah. The revenue-rich parking lots. Because obviously the state of California should be intimately involved in the lucrative parking lot business in South Central LA, which is apparently losing them several million dollars a year.

Watching this stuff from afar is just maddening. The Coliseum was built for the 1932 Olympics and is jointly run by the city, county and state. The NFL has made it crystal clear that no professional team will ever play there, which makes it completely useless to all three entities aside from the fact that it provides a cozy sinecure for members of the Coliseum Commission, who get free tickets to USC games and the occasional X Games event, as well as the warm glow of being important people. Except they don’t even get free tickets anymore. They had to give them up after a series of LA Times articles exposed endemic corruption and mismanagement within the commission.

The answer to all this is obvious: just sell the damn thing to USC. They’d pay a fortune for it, they’d renovate it to within an inch of its life, and they’d turn it back into a jewel. That’s because USC is really rich and has lots of alumni who really like football. And the city, county, and state would be out of the football stadium business, which they never needed to be in in the first place.

But that will never happen because — because shut up, that’s why. Running a stadium is just too much fun and provides too many perks to think about giving it up. Idiots.

UPDATE: In comments, nominal says that Coliseum Commission members aren’t paid salaries. That’s true, and I’ve corrected the text to reflect this. Most of the recent scandal has involved Coliseum executives, not commission board members directly. As the LA Times says, “The groundwork for the scandal lay in years of clumsy stewardship, marked by inattentive commission members and a cozy relationship between [former GM Patrick Lynch] and his bosses.”