Conservatives are mad at Chief Justice John Roberts for voting to uphold Obamacare. But two liberal justices, Stephen Breyer and Elena Kagan, joined Roberts in ruling that Congress went too far when it threatened to remove all Medicaid funding from any state that didn’t accept Obamacare’s new Medicaid expansion. Congress can nudge the states, said Roberts, but it can’t command them, and the threat of losing all Medicaid funding amounted to “gun to the head.”

So should liberals be just as mad at Breyer and Kagan as conservatives are at Roberts? Scott Lemieux says no: Roberts was the swing vote that meant the difference between keeping or killing the entire Affordable Care Act, while Kagan and Breyer were just two 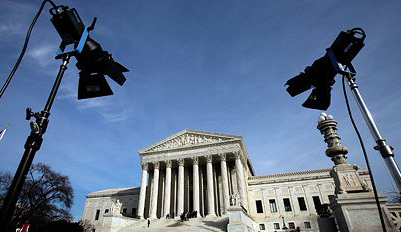 bonus votes on a small subset of the law. There was already a 5-4 majority for Roberts’s view, so Kagan and Breyer didn’t affect the outcome.

But there might be more to this. Lemieux spells it out:

There was a unique strategic element to this case that gave a powerful reason for Kagan and Breyer to join Roberts. Roberts’s belated decision to uphold most of the ACA, first of all, probably compelled Kagan and Breyer to show some cross-ideological comity to encourage him to stay in the fold. Admittedly, we cannot know for certain what effect the strategic votes of Kagan and Breyer had on Roberts. (I hope that the Supreme Court leakers will find some time to tell us whether Breyer and Kagan changed their votes after conference.) Given that it’s unlikely that there was explicit horse-trading involved, it may always be unknowable. But this is where the first point becomes crucial. Liberals had nothing to lose by joining Roberts on this one issue, so they had no reason not to try to cement his belated switch.

This is all completely speculative, of course, but my gut feeling agrees with Lemieux. Whether the horsetrading was explicit or not, something about this whole case smells of logrolling: Maybe Roberts really did feel that it was unwise to overturn ACA based on a new and fairly tenuous doctrine, but I can’t help but wonder if he also tried to convince some of the other conservative justices that there was a deal to be made with the liberals: namely keeping Obamacare alive in return for a strong ruling (7-2, maybe even 8-1) that placed some real constraints on Congress’s Commerce Clause powers. In the end, he didn’t get that. None of the conservatives signed on to a larger deal, and all Roberts got was a 7-2 ruling on the Medicaid issue.

Needless to say, I have no idea if this is what happened, and I’ll admit that the sense of genuine anger coming from the conservative leakers doesn’t really fit this theory. Their anger is more consistent with the notion that Roberts’s switch came out of the blue and was motivated by cowardice or politics or fear.

On the other hand, the fact that the leakers are so obviously angry means that we’re getting a pretty one-sided story from them (i.e., Roberts betrayed us even though we tried hard to make him see reason, and that’s all there is to it). Isn’t there somebody somewhere who has any contacts with the liberal side of the court and can get their side of the story? If we’re going to hear anything at all, it would be nice to hear from more than just the embittered Kennedy/Scalia wing.