Should states sign up for Obamacare’s expansion of Medicaid, even though the Supreme Court says they don’t have to? The answer depends a lot on how much it will cost them. On the downside, states would have to pay part of the cost of covering new enrollees. On the upside, they’d save some money because Medicaid would start covering some indigent medical expenses that states are currently on the hook for. This is all pretty obvious, but it’s also pretty vague. We need hard numbers. Will new costs outweigh new expenses? Or vice versa?

This requires a more detailed accounting, and we don’t have that yet. Today, though, Sarah Kliff reports that Arkansas has taken a first cut at estimating both the costs and savings of signing up for the expansion. They figure that in 2015 the new law would cost them $42 million and save them $131 million. So it’s a clear winner. But that’s because the federal government picks up 100% of the tab for expansion during the first 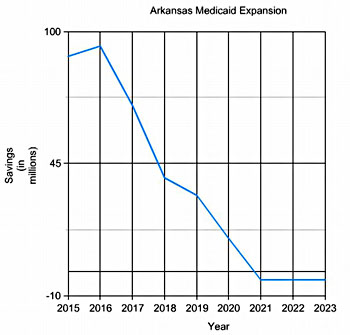 three years. That declines to 90% by 2020, and Arkansas figures that by 2021 the expansion of Medicaid would cost them $3.4 million per year.

Now, that’s $3.4 million out of a $4 billion Medicaid budget, of which Arkansas pays $750 million. So it’s not a lot of money, especially considering the number of people it would help.

Politically, though, it sets up an interesting dynamic. A lot of states, especially in the South, are resisting the Medicaid expansion. It’s going to be tough for them to stick to their guns, however, because there are a lot of interest groups (for example, hospitals who are losing funding for indigent care and desperately need the new Medicaid dollars) who are going to be pushing hard to accept the expansion. But if the Arkansas analysis turns out to be broadly true for other states, it’s going to be even harder to resist than we think. How many legislatures will turn down a badly-needed federal funding windfall during tough times if the only downside is a minuscule cost six years down the road? Some, I suppose, but probably not too many.

Arkansas may be a special case, since its share of Medicaid expenses is one of the lowest in the nation (only Mississippi and West Virginia pay a smaller percentage of their Medicaid bills). States with higher expense levels might not do as well. It’s also worth keeping in mind that this is just a first-cut estimate. Things might change in either direction as we get a better handle on all the details. So take it all with a grain of salt.

Still, it’s encouraging. If other Southern states, most of which also pay a very small share of their Medicaid expenses, come to the same conclusion, Obamacare’s Medicaid expansion may turn out to be an offer they can’t refuse after all.