I’m not going to pretend to understand this, but a group of Spanish scientists say they now have empirical evidence that modern pop music is boring: 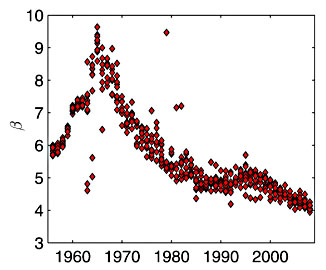 We find three important trends in the evolution of musical discourse: the restriction of pitch sequences (with metrics showing less variety in pitch progressions), the homogenization of the timbral palette (with frequent timbres becoming more frequent), and growing average loudness levels.

Basically, musicians are using fewer and simpler note sequences, less variety in timbre, and then making up for it by cranking up the volume. The chart on the right, which is really the only comprehensible one in the paper, shows the evolution of timbral variety, peaking in the 60s and then dropping off dramatically every year since.

Later, during a Q&A with neighborhood kids, the researchers added, ¡Quítese mi césped!