Republicans have eagerly taken to the airwaves to say that the Supreme Court has proven that Democrats are liars. After all, Democrats have long insisted that Obamacare’s penalty for not buying health insurance isn’t a tax, but on Thursday the Supreme Court upheld it on the grounds that it was a tax. J’accuse! Or, as America’s Bard of the Frozen North tweeted, “Obama lies, freedom dies.”

This is so stupid it hurts. But Josh Marshall says that what comes next is even more brain dead:

Republicans are now saying it’s the ‘biggest tax increase in history’ — either of America or the universe of whatever. But this is demonstrably false.

The Congressional Budget Office says the mandate penalty will raise $27 billion between 2012 and 2021. $27 billion over a decade. Anybody who cares to can do the math. But if you want to call it a ‘tax increase’ — which is debatable — it’s clearly one of tiniest ones in history.

Let’s be fair: When Republicans talk about ACA’s tax increases, most of them are talking about all the taxes in the bill, not just the penalty. But they’re still off base. There have been 15 tax increases of significant size since 1950, and Jerry Tempalski, a tax analyst in the Treasury Department, has estimated the size of all of them as a percentage of GDP.  Tempalski hasn’t estimated the eventual size of ACA, but PolitiFact took a crack at it using the same methodology, and they figure that ACA amounts to a tax increase of 0.49% of GDP seven years from now. That places it tenth on the list.

It’s fair for Republicans to complain that ACA includes a bunch of new taxes. It does. Most of them fall on high earners and corporations, not the middle class, but they’re still taxes. However, the “biggest tax increase in history” nonsense is crazy, and no news outlet interested in accuracy should let it pass without challenge. 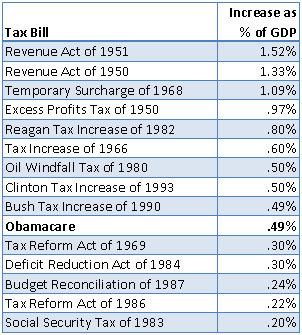