Yesterday’s big story came from Jan Crawford of CBS News, who reports that two separate sources within the Supreme Court confirmed to her what people have been speculating about since Thursday: Chief Justice John Roberts was initially planning to join the court’s conservatives to strike down Obamacare, but then changed his mind. But why?

Some of the conservatives, such as Justice Clarence Thomas, deliberately avoid news articles on the Court when issues are pending….But Roberts pays attention to media coverage. As Chief Justice, he is keenly aware of his leadership role on the Court, and he also is sensitive to how the Court is perceived by the public.

There were countless news articles in May warning of damage to the Court — and to Roberts’ reputation — if the Court were to strike down the mandate….It was around this time that it also became clear to the conservative justices that Roberts was, as one put it, “wobbly,” the sources said.

Hmmm. Maybe. In any case, it sure sounds like Crawford’s sources are a couple of pissed-off conservative justices, doesn’t it? I’d tentatively view this story though that lens, anyway. Then there’s this:

Some informed observers outside the Court flatly reject the idea that Roberts buckled to liberal pressure, or was stared down by the President. They instead believe that Roberts realized the historical consequences of a ruling striking down the landmark health care law….To strike down the mandate as exceeding the Commerce Clause, the Court would have to craft a new theory, which could have opened it up to criticism that it reached out to declare the President’s health care law 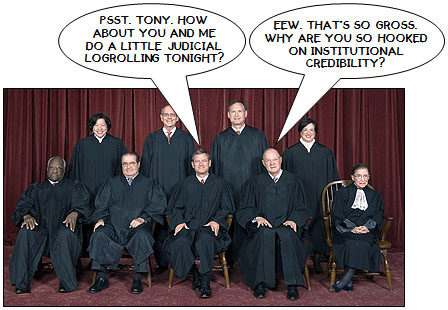 unconstitutional. Roberts was willing to draw that line, but in a way that decided future cases, and not the massive health care case.

This sounds plausible to me — mainly, I admit, because it was precisely what I thought the court should do:

If they don’t want a rerun of the 1930s, which did a lot of damage to the court’s prestige, but they do want to put firmer limits on Congress’s interstate commerce power, the [justices should] find a limiting principle of their own. But find one that puts Obamacare just barely on the constitutional side of their new principle. This would avoid a firestorm of criticism about the court’s legitimacy — that they’re acting as legislators instead of judges — but it would satisfy their urge to hand down a landmark decision that puts firm limits on further expansion of congressional power. Liberals would be so relieved that Obamacare survived that they’d probably accept the new rules without too much fuss, and conservatives, though disappointed, would be thrilled at the idea that the court had finally set down clear limits on Congress’s interstate commerce power.

As it happens, that’s pretty much how it went down: Obamacare was upheld, but new limits were placed on Congress’s power. Roberts just wasn’t able to get any of the other conservatives to go along.

If I had to guess, the bait for the conservatives was the possibility of getting liberal buy-in for new restrictions on Commerce Clause power. A decision that went 7-2 or 8-1 in favor of some concrete restriction, at the price of letting Obamacare slide in on a technicality, might have seemed appealing. And it’s possible that some of the liberals were willing to go along. But if that was the pitch, apparently none of the conservatives was willing to bite. In fact, the story suggests they’re pretty bitter about the whole thing:

Roberts [] engaged in his own lobbying effort — trying to persuade at least Justice Kennedy to join his decision so the Court would appear more united in the case. There was a fair amount of give-and-take with Kennedy and other justices, the sources said. One justice, a source said, described it as “arm-twisting.”

….The majority decisions were due on June 1, and the dissenters set about writing a response, due on June 15. The sources say they divided up parts of the opinion, with Kennedy and Scalia doing the bulk of the writing….The fact that the joint dissent doesn’t mention Roberts’ majority was not a sign of sloppiness, the sources said, but instead was a signal the conservatives no longer wished to engage in debate with him.

Will we be hearing more about this? I hope so! Every other agency of government leaks like a sieve, and I don’t know why the Supreme Court should be any different. I want the dirt, and I want it now. Who is going to be the TMZ of Supreme Court gossipmongering?