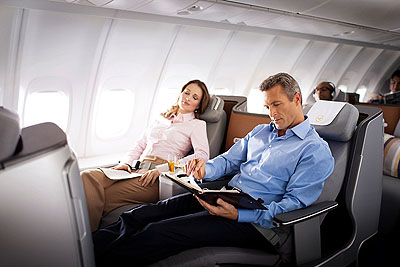 Michael O’Hare asks a question that’s been puzzling me approximately forever: why do airlines charge so much for business class seats?

On most wide-body aircraft, seven international business class seats take up about the same cabin floor space as 18 coach seats. So the airline should be indifferent between selling coach seats for $C and business seats for 18/7 x C, a little more than twice as much. Instead, they charge five to six times as much for business. For the $1150 SFO-FRA RT itinerary I just looked at on United, this should be about $3000, but the business fare is $5600 or $6200. What’s the extra two-and-a-half large for?

There’s more, but the basic math doesn’t change much. Logic suggests that a business class seat should sell for about twice what a coach class seat sells for, but in reality it’s more like 4-5x higher and they routinely fail to sell all their seats. (Many of them are given away as free upgrades to their “elite status” Gold/Platinum customers.) Why?

When this kind of question comes up, I always assume that airline executives aren’t idiots. Not all of them, anyway.1 This isn’t exactly rocket science, after all, and the arithmetic is pretty obvious. So why don’t they do it? Is it because the elasticity of business class seats turns out to be really weird? Because they actually make more money holding some seats back for upgrades? Because the business class price is about 2x the full coach fare, and it makes more business sense to discount coach fares than business class fares? Is there some arcane regulatory issue at play?

I dunno, and it’s the kind of thing airline executives (apparently) won’t talk about truthfully, which makes the whole thing even stranger. Like Michael, I’ve often booked a flight knowing that I’d be willing to pay 2x to get a business class seat, but I’m not willing to pay 5x. So the airline loses a bunch of money on me. I’m not sure why they’re all willing to do this. But it really is all of them, so there must be something going on.

1Yes, yes, I know all the jokes. But honest: they’re not all total morons.

UPDATE: If you want my guess about this, here it is. It’s basically weird elasticity. Suppose that coach fare on a particular flight is $1000, and there are ten business class seats. At 5x pricing, the airline sells half the seats to people who are flying on corporate accounts and are willing to pay no matter what the price. The other half of the seats are given away to Gold/Platinum upgraders. Total revenue: $25,000 plus some happy regular customers who got the upgrade. At 2x pricing, they sell all ten seats. Total revenue: $20,000.

If this is the way things work, it’s possible that there’s simply no price lower than 5x that produces higher total revenue. Weird but possible. (Though if this is the case, I do wonder why airlines can’t figure out a way to engage in some of their famous price discrimination to increase revenue beyond what they can get by charging either 5x or zero.)